The legendary actor, George Segal, has died aged 87. He starred in hit films such as Killing 'em Softly, Look Who's Talking Now, Just Shoot Me! and countless other projects on the silver and small screen.

Even if you can't quite place his films off the top of your head, he's a face almost everyone will recognise from somewhere. He wasn't just a seasoned veteran and journeyman though, Segal received Oscar nominations, won two Golden Globes and a number of other awards for stage acting. 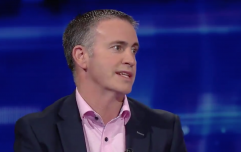 END_OF_DOCUMENT_TOKEN_TO_BE_REPLACED

The news was announced in a statement by his wife, Sonia: "The family is devastated to announce that this morning George Segal passed away due to complications from bypass surgery."

To younger audiences, he might be most recognisable as "Pops" in the TV show, The Goldbergs, but arguably his most notable role was in Who’s Afraid of Virginia Woolf? - a black comedy that began on stage and was adapted into a film. The performance secured him critical acclaim along with his wider popularity.

He appeared in over 40 movies, over 50 TV shows and nine stage productions. To say he had a career would be putting it mildly: he did more than most and is a notable loss to the industry.

Girls With Goals || Her · Ep.161: Feeling Peachy - Sharon Keegan of Peachylean on being an absolute BOSS!
popular
Harry Styles accepts BRIT for Best British Single - with American accent
Is that Seth Rogen without a beard?
Woman buys 148 year old house, goes viral after finding secret passage way
Little Mix pay tribute to Jesy as they make history at BRIT Awards
Lewis Capaldi muted by BRITs during chaotic, swear-y speech
Someone has ranked the penis size of men from all over the world
Penneys issues statement after shoppers try to sell appointments for €100
You may also like
1 day ago
Grey's Anatomy renewed for season 18
2 weeks ago
The full list of all the new shows and movies coming to Netflix in May
2 weeks ago
New RTÉ series goes behind the scenes at the DSPCA and it looks ridiculously adorable
3 weeks ago
Line of Duty fans think trailer reveals Kate's fate
4 weeks ago
BBC renews Call The Midwife for three more seasons
1 month ago
QUIZ: How well do you really remember the first episode of Grey's Anatomy?
Next Page