Over 40 animals are believed to have died following a blaze at a dog sanctuary in Manchester.

Firefighters were called to the scene of the fire shortly after 7pm and while 150 animals have been rescued from the facility, a further 43 are understood to have perished in the blaze.

According to The Mirror, a 14-year-old boy has been arrested by police in relation to the fire. 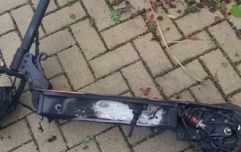 END_OF_DOCUMENT_TOKEN_TO_BE_REPLACED

"We are working closely with Greater Manchester Fire and Rescue Service to establish how this tragedy has occurred. We are in the very early stages of the investigation and have a young boy in custody, however we would ask if anyone was in the area and remembers seeing anything suspicious around the dogs' home that they call police and tell us what they know.

"As a dog owner myself, I understand that many people will feel angry and upset about what has happened, but I would ask that they let the police carry out their investigations and not take matters into their own hands. We have received an overwhelming response from the public and would ask if anyone wants to help they can make donations of food or bedding to North Manchester divisional headquarters on Northampton Road in Newton Heath."

Girls With Goals || Her · Ep.155: 'Bits of Me' - Linnea Dunne on the importance of women's health
popular
Two elderly men found dead as Gardaí "urgently" search for red van in Cork
Scarlett Moffatt discovers ‘30% rain’ on weather app doesn’t mean chance of rain
Anne Hegarty shook by "worst ever" final Chase
Princess Anne: Harry and Meghan were right to quit royal duties
Met Éireann predicts dry, bright, and sunny weekend
Lady Gaga's dog walker shot as her two dogs are stolen
Baileys chocolate cupcakes are coming just in time for Mother's Day - and any day, really
You may also like
1 year ago
Local fire brigade share images from aftermath of car park blaze in Cork
1 year ago
Attention BBQ lovers: WIN two tickets to the Big Grill to give your taste buds a treat
1 year ago
A hundred firefighters are battling a massive fire at block of flats in east London
1 year ago
Guinness X Meatopia is BACK! Expect tastings, workshops and an insane lineup
1 year ago
'850 years of history taken down in 5 minutes': Outpouring of emotion as Notre Dame spire collapses
1 year ago
Festival-goers told to run as fire breaks out at Coachella overnight
Next Page