A safari park in China has revealed today they are the new home to baby panda triplets who were born late last month.

Guangzhou’s Chimelong Safari Park announced the news the same day that Edinburgh Zoo has revealed that one of its pandas is believed to be pregnant.

The panda cubs were born on July 29th to mother Juxiao, and are the world’s only panda triplets in existence. The safari park has called the birth a “miracle”, citing advancements in panda breeding technology. 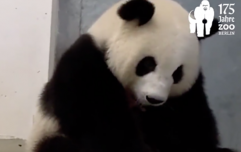 END_OF_DOCUMENT_TOKEN_TO_BE_REPLACED

The achievement of birthing panda cubs is even bigger when both female and male pandas are notoriously uninterested in sex and are particularly choosy over mating partners, while only having a window of several days to conceive each year.

According to The Wall Street Journal, panda cubs usually open their eyes around day 50, and begin crawling at 10 weeks.

The first year will be tough for the safari park to ensure the safety of their newest arrivals as 26% of male panda cubs and 20% of females die within their first year.

The sex and names of the panda triplets have yet to be revealed, while the newborn cubs are currently inside an incubator at the Chimelong Safari Park in Guangzhou.

Image via The Wall Street Journal

popular
Wagatha Christie: Rebekah Vardy storms out of court just 30 minutes into final day
Helen McCrory's children give heartbreaking tributes at her memorial service
Claire Byrne Live viewers in shock as woman shares family DNA secret
Only a matter of time before monkeypox spreads to Ireland, says expert
Ashley Graham says she nearly died while giving birth to her twin boys
Dog owners warned about the "big stretch"
Sainsbury's evacuated after several people fall ill with breathing problems
You may also like
2 years ago
WATCH: Berlin Zoo's baby panda twins are three months old and yeah, still too cute tbh
3 years ago
Happy Friday! Here's a video of a panda rolling around in the snow
7 years ago
Adorable - World's Only Giant Panda Triplets Celebrate Their Birthday
7 years ago
WATCH: This Little Panda Cub Is (Literally) Pretty Attached To His Zoo-Keeper
8 years ago
Dream Job?! Chinese Conservation Centre Seeks Panda “Nanny”
8 years ago
VIDEO: Zoo Cheer Up Sad Panda - By Building Her An Amusement Park
Next Page