Peaches Geldof's husband Thomas Cohen sang a song in a touching tribute at her funeral.

It's believed that the SCUM rocker sang Leonard Cohen's Hey, That's No Way To Say Goodbye at a ceremony for the model and journalist, who died suddenly at their home aged just 25. According to The Mirror, Jools Holland and Queen drummer Roger Taylor also performed at the service, with an attendee describing the funeral as "like a gig. It was so lovely, a real celebration of her life".

"Tom was brave to sing as he was ­tremendously upset," they added. 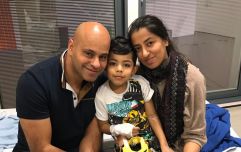 END_OF_DOCUMENT_TOKEN_TO_BE_REPLACED

Record label boss McGee has also spoken of the emotional scenes witnessed during the final farewell to Peaches.

“It was very heavy when I saw Bob help carry his daughter down through the chapel. It was incredibly tragic but I think he handled it as well as any man could," he said.

“The bravest thing I think I’ve ever seen him do is give the eulogy to his daughter who has died.”

The cause of the 25-year-old death is still unknown, as doctors await the result of toxicology tests.

popular
Little boy dies of cancer after doctors ignored mother's warnings six times
Love Island's Zara's brother reveals the real beef going on between her and Olivia
Funeral of Cork toddler takes place after choking accident
Love Island first look: Tom and Ellie's secret kiss is revealed as they head back for round two
Abigail Breslin marries longtime love Ira Kunyansky
Baby dies next to mother who drank 'two or three' bottles of wine then fell asleep
Anne Hathaway shares disappointing news about The Princess Diaries 3
You may also like
3 months ago
Kesha's mom explains controversial Jeffrey Dahmer lyric in hit song Cannibal
3 years ago
'Save your breath...' Una Healy hits out at Ben Foden in her new breakup track
4 years ago
Thank U, Next - why you shouldn't feel embarrassed or ashamed by past relationships
5 years ago
Pitch Perfect 3 has released an acapella track ahead of new movie
6 years ago
This is the happiest song in the world according to science
6 years ago
Coláiste Lurgan's version of Hello in Irish is absolutely stunning
Next Page