Two months ago, a Northern Irish judge made a ruling calling the inability of women to access free, safe and legal abortions 'a gross interference of her bodily autonomy.'

This ruling was hailed as a landmark step towards making abortion available in cases of fatal foetal abnormalities or cases of sexual crime such as rape or incest.

However, this ruling has been shot down by Stormont assembly members 59 to 40, RTÉ News reports. 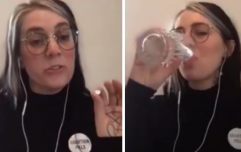 END_OF_DOCUMENT_TOKEN_TO_BE_REPLACED

The discussion around the issue ran to almost midnight, however the DUP and SDLP had already indicated they would not support the changes, with Sinn Féin in favour.

Unlike other parts of the UK, the Abortion Act does not extend to Northern Ireland, where you can only currently avail of one if the mother's life or mental health is in danger.

popular
Toddler dies after being struck by vehicle in Co. Cork
Women are rinsing their hair in apple cider vinegar – and the results are amazing
New photo of Bernadette Connolly released as investigation continues
Clubbers left "bleeding from their mouths" after accidentally drinking shots with caustic soda
Orange is the New Black and Seinfeld star Kathryn Kates dies aged 73
"Hair contouring" is about to be huge, here's everything you need to know
Love is in the air: 3 new fragrances we love – just in time for Valentine's Day
You may also like
1 month ago
3 years on from repeal, abortion is still not fully accessible in Ireland
1 month ago
Mike Pence is calling for abortion laws in the US to be completely overturned
2 months ago
Safe Access Zones bill passes second stage at Seanad
2 months ago
Vigil held at the Dáil to mark nine years since Savita Halappanavar's death
3 months ago
Judge temporarily blocks Texas abortion law
4 months ago
Lack of information a major barrier for women seeking abortions in Ireland
Next Page