Over the weekend, hundreds of protesters took to the streets of Istanbul in response to the vicious murder of tran activist and sex worker Hande Kader.

Hande Kader was a well-known and highly respected figure in the Turkish LGBTI community, who was often found on the front line of protests decrying Turkey’s restrictive and archaic laws against the trans community. 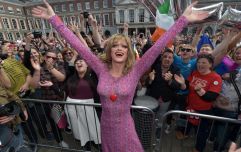 END_OF_DOCUMENT_TOKEN_TO_BE_REPLACED

Kader was last seen by a friend getting into an unidentified client's car. Her body was then discovered in a forest on 12 August, so badly burned that officials required additional prosthetics to identify her. According to local media, she had been raped, beaten and set on fire.

She was identified by her roommate, Davut Denglier, who told the BBC;

“She would go crazy when trans individuals were killed. She’d be so sad…She had been stabbed and beaten before. This didn’t only happen to Hande. It happens to all of them.”

Her name was #HandeKader A relentless #LGBT activist for equality & @istanbulpride She was murdered in a #hatecrime pic.twitter.com/WE1eNwdZem

According to data from the rights group Transgender Europe, Turkey has the highest number of trans murders in Europe. When police banned the annual LGBTI Pride march in 2015 and tried to break up the crowds with rubber bullets and pepper spray, Kader was overheard shouting at journalists,

“You take pictures but you do not publish them. No-one is hearing our voices.”

The protests which took place over the weekend and are organised to take place this week again, fly in the face of the restrictions on demonstrations in Turkey after last months the failed coup attempt against President Erdogan.

Although the topic of LGBTI rights is certainly a contentious one in Turkey, many high profile people have come out in support of justice for Hande Kader.

Kaders murder has so far received international attention with the hastag ‘#HandeKadereSesVer’ (Give voice to Hande Kader) trending globally on Sunday.