The Sinn Féin leader will be involved after all.

RTÉ's General Election steering committee met at 11am on Monday to consider representations from Sinn Féin for Mary Lou McDonald to participate in the Prime Time leaders' debate.

Originally, the debate was scheduled to be solely between Taoiseach Leo Varadkar and the Fianna Fáil leader Micheál Martin.

However, McDonald will now participate.

RTÉ has reported that Sinn Féin's Pearse Doherty, who made the request to RTÉ in person on Sunday, had argued that recent opinion polls prove that the criteria used to exclude McDonald are redundant.

An opinion poll on Sunday placed Sinn Féin as joint leader with Fianna Fáil on 24 percent each, ahead of Fine Gael on 21 percent. 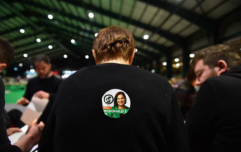 Why the youth vote shouldn't be dismissed as snowflake politics

END_OF_DOCUMENT_TOKEN_TO_BE_REPLACED

RTÉ had previously said its approach to leaders’ debates was based on empirical data on previous vote shares, but indicated that it was “open to evaluate representations by political parties”.

RTÉ has also stated that the Taoiseach and Micheál Martin have no issues with the format being changed to accommodate the Sinn Féin leader.

The Labour Party has also submitted a proposal to RTÉ requesting that the leader of any party which could participate in the next government, be allowed to join the debate.

Prime Time - The Leaders Debate airs at 9.35pm on Tuesday, 4 February on RTÉ1.

popular
Lookdown looks: I was wearing tracksuits 24/7 before it was cool
These sustainable Irish sweaters are making people smile, and they're back in stock tonight!
Body found in search for missing five-year-old boy in Co. Mayo
Gwen Stefani reportedly pregnant with baby number four
Temperatures to reach 27 degrees today, but the good weather won't last for long
Amy Schumer reveals that her husband Chris Fischer has autism spectrum disorder
After days of silence, Scott and Sofia finally comment on the break up rumours
You may also like
3 months ago
Vote counts begin across the country following extraordinary exit poll
3 months ago
A message to our next government: LGBTQ+ parents are #StillNotEqual and it's time to change that
3 months ago
"The further away you are from Dublin the less they care." Voters in Donegal share their views on #GE2020
3 months ago
#GE2020: Four first time female candidates on why they're running for the Dáil
3 months ago
#GE2020: Meet the Irish MUA who has turned her platform to politics
3 months ago
General Election 2020: Where the parties stand on Domestic Violence and Sexual Assault
Next Page