Summer has just ended but that doesn't stop us dreaming about a few upcoming trips. If you're like us and already thinking about summer 2020 then we have some good news - Ryanair has just announced seven new routes leaving from Cork and Dublin airports. 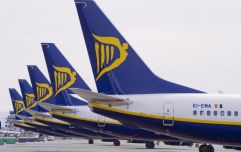 END_OF_DOCUMENT_TOKEN_TO_BE_REPLACED

Routes to Billund (two weekly) and Toulouse (daily) will start in the summer.

Meanwhile, Cork airport will see a new route of Katowice being added in with two flights per week and increased flights on routes to Malaga (six per week) and Palma (four per week) have also been added.

According to the Irish Mirror, Kenny Jacobs of Ryanair said:

"We're delighted to bring the lowest emissions and fares to Ireland with our Summer schedule 2020, with 4 new Dublin routes to Marseille, Palanga, Podgorica and Verona, and 160 routes in total, which will deliver 17.2 million customers p.a. and support over 12,900 jobs at Dublin, Shannon, Cork, Knock and Kerry airports.

"Irish customers and visitors can now book low fare seats on 160 routes as far out as October 2020.

"To celebrate, we are releasing seats for sale from just €14.99 for for travel until the end of November 2019, which are available for booking until midnight Friday (27 Sept). "

popular
Woman dies four days after proposal after using wrong spoon to stir tea
Woman spots dead husband in promo video for Indian restaurant
S Club 7's Hannah Spearritt and children left homeless after being forced from home before Christmas
Naked Attraction host left speechless after seeing contestant with 'world's biggest penis'
"I feel like I lost myself": Nathalie Lennon on her mental health struggles and her latest project with Pieta
Redhead girl stabbed with scissors at school 'because of colour of her hair'
Molly-Mae Hague fans think they officially know her baby's name – and it means cloud
You may also like
5 months ago
Ryanair, easyJet and BA issue warning to anyone boarding with smart bag
5 months ago
Forget about ultra cheap Ryanair flights for the foreseeable future, says O'Leary
6 months ago
What to do if your bag is lost on holiday
6 months ago
Woman finds Dealz pack that is perfect for getting away with Ryanair's luggage allowance
8 months ago
TikToker shows how to fit more in your bag on a Ryanair flight without paying extra
9 months ago
British couple get on wrong Ryanair flight - go 800 miles in wrong direction
Next Page