He said it was "the perfect antidote" to RTÉ and NPHET's "daily doses of pessimism".

Ryanair CEO Michael O'Leary has defended the airline's 'Jab and Go' ad, claiming that there is nothing insensitive or wrong about it.

He said that the tone of the ad is "completely fine", and that it acts as "the perfect antidote" to RTÉ and NPHET's "daily doses of pessimism". 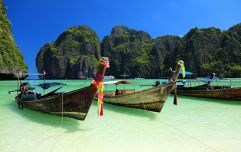 END_OF_DOCUMENT_TOKEN_TO_BE_REPLACED

He made these comments while speaking on RTÉ's Morning Ireland on Monday morning.

However, O'Leary also said that Ryanair will not be requiring proof of vaccination from intending passengers.

In what was a fascinating interview, O'Leary also said that everyone who has requested a refund for a cancelled flight has received one.

When asked by Adam Maguire whether all the people on social media who are claiming not to have gotten a refund from Ryanair are lying, O'Leary replied: "Correct."

This comes after Ryanair said it may lose close to €1 billion in its current financial year, but that Europe's largest low-cost carrier said the crisis would create significant growth opportunities.

The airline said it expects to post a loss of between €850-950m in its current financial year, which ends on 31 March. This would be its worst ever financial performance.

In a statement issued to JOE, the airline said: "As we look beyond the Covid-19 crisis, and vaccinations roll out, the Ryanair Group expects to have a much lower cost base and a strong balance sheet, which will enable it to fund lower fares and add lower cost aircraft to capitalise on the many growth opportunities that will be available in all markets across Europe, especially where competitor airlines have substantially cut capacity or failed.

"We will work assiduously with our airport and Govt partners to restore routes and recover traffic for the benefit of our airports, our customers and our people as we try to prioritise the jobs and salary recovery of our people."

popular
Apparantly, there is one colour you should never wear at a job interview
Late Late Show viewers are not happy with Ryan's questions for Billy Connolly
Friends Star James Michael Tyler Files For Divorce
New study finds link between fizzy drinks and infertility
Friends actor James Michael Tyler has died, aged 59
9 of the best horror movies on Netflix this Halloween
10 items from Zara for the perfect autumn capsule wardrobe
You may also like
1 week ago
Weekend break? Here are the 3 best hotels in Northern Ireland right now
2 weeks ago
10 spooky things to experience in Ireland this Halloween
1 month ago
US to end travel ban for vaccinated passengers in November
1 month ago
Cork's Metropole Hotel is a touch of glamour in the Victorian Quarter
1 month ago
You can now buy a house in an Italian town near Rome for €1
2 months ago
Autumn staycation? Right now, you can get a great deal on a weekend in Belfast
Next Page