Micheál Martin's proposal comes amid reports passengers are currently paying the fine and carrying on with their international journey.

Taoiseach Micheál Martin has proposed for new regulations to be introduced which would increase the fine for non-essential international travel to €2,000.

As it stands, those caught breaching the current regulations are obliged to pay a €500 fine. 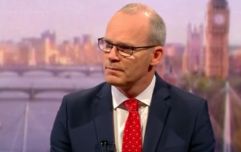 END_OF_DOCUMENT_TOKEN_TO_BE_REPLACED

However, reports suggest that a number of travellers are currently paying the fine, and then continuing on with their journey, leading Martin to propose a more prohibitive punishment.

Martin confirmed the plan to the Dáil on Wednesday afternoon.

Speaking in the Dáil, he said that around 60% of international travellers arriving into Ireland are returning Irish holidaymakers.

Martin told Labour's Duncan Smith that "there is a sense that €500 is not a sufficient disincentive to travel abroad" and said that the increased fine would aim to "act as a significant deterrent" to non-essential travel.

The Government is now also considering mandatory hotel quarantine for people coming into the country for non-essential reasons from holiday destinations.

Martin said that legislation will be brought forward for approval by Cabinet next Tuesday to deal with mandatory quarantine.

Martin's proposal comes after it emerged earlier on Wednesday that 13,600 people arrived into Dublin Airport from overseas last week.

Girls With Goals || Her · Ep.160: The Beauty Of Coaching - Hayley Harrison joins us from Sport Ireland
popular
Penneys shopping by appointment booking portal is now live
ASOS is selling moob tubes and we all know someone who'd wear one
First Dates Ireland's Mateo Saina welcomes baby boy with partner Vjerana
"Irresponsible" Max Mara advert banned over "gaunt" model
More footage of Tristan Thompson cheating on Khloe has emerged
Lidl's hanging egg chair is coming back to stores this month
Here's what happens on every day of your menstrual cycle (roughly)
You may also like
5 days ago
A new luxury boutique hotel is about to open in Co. Antrim – and staycation here we come
1 week ago
PICS: Disney gives first look at new cruise ship, the Disney Wish
1 week ago
Inter-county travel to be considered for early May
1 week ago
WFH – but away? You can now buy a house in Sicily for less than the price of a coffee
1 week ago
Staycation: 5 hotels, Airbnbs and guesthouses perfect for solo getaways across Ireland
1 week ago
Goodbye, 5k! Ireland's top picnic spots have been revealed
Next Page