These are the ten most expensive streets in Ireland

Perhaps not surprisingly, all of the most expensive streets are located within a short distance of each other in the capital.

Every single one of the ten most expensive streets in Ireland are located south of the Liffey in Dublin, according to the Daft Wealth Report for 2017.

The ranking of the most expensive streets in the report is based on an analysis of residential transactions of €3m or more over the last 18 months, with five streets having a number of homes selling for such amounts.

END_OF_DOCUMENT_TOKEN_TO_BE_REPLACED

In second and third place respectively, Ailesbury Road and Shrewsbury Road illustrate that they are well deserving of their lofty status on a Dublin Monopoly board, but it is Herbert Park in Ballsbridge which claims the number one spot, having seen no fewer than five properties change hands for €3m or more in the last 18 months.

Temple Gardens, just off Palmerston Road in Dublin, ranked in fourth place, with Westminster Road in Foxrock, Avoca Avenue in Blackrock, Highfield Road in Rathgar, Wellington Road in Ballsbridge, Cowper Road in Rathmines and Eglinton Road in Donnybrook making up the top ten. 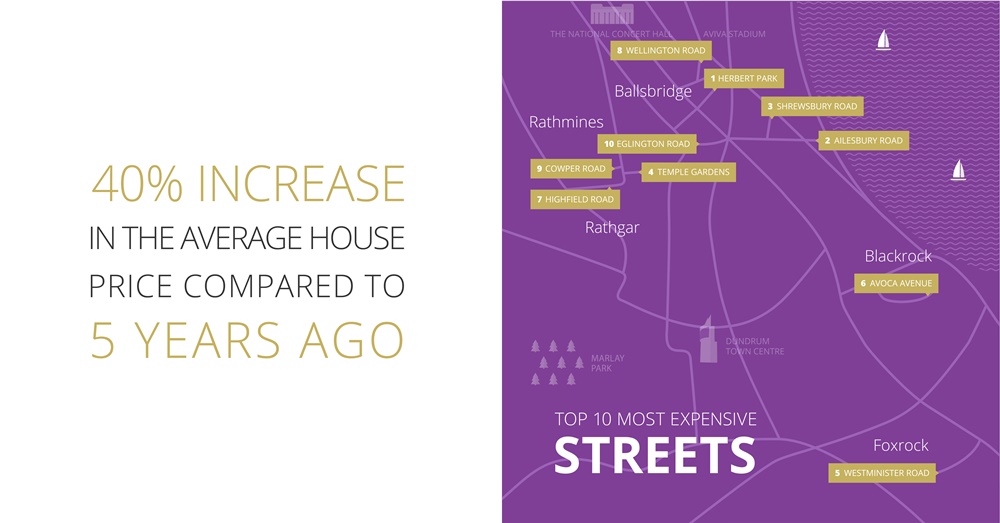 The report revealed that 12 residential properties worth €1 million or more are sold in Ireland every single week and that, according to the Property Price Register, as many as 1% of properties in Ireland are worth that amount and more.

Of all the 54 different markets in the country – 22 postal districts of Dublin, North, South and West Dublin, the four other cities, and then the 25 other counties (excluding the city areas) – it is little surprise that South County Dublin is the most expensive market in the country, with an average property value of almost €550,000.

Dublin 6, Dublin 4 and Dublin 6W, meanwhile, also have average property values over €500,000, with Dublin 14 also making it into the top five.

At the other end of the scale, the cheapest five markets in the country are concentrated in the North-West.

END_OF_DOCUMENT_TOKEN_TO_BE_REPLACED

The cheapest market in the country is Ballaghaderreen in Roscommon, where the average property value is just €58,000.

You can read the Daft Wealth Report 2017 in full here.

Girls With Goals || Her · Ep.160: The Beauty Of Coaching - Hayley Harrison joins us from Sport Ireland
popular
ASOS is selling moob tubes and we all know someone who'd wear one
Man discovers 'fake cupboard' in kitchen is actually a dishwasher
More footage of Tristan Thompson cheating on Khloe has emerged
Hailey Bieber addresses pregnancy rumours after Thanksgiving photo sent fans wild
How to INSTANTLY unblock your stuffy nose (we swear this works)
Someone has ranked the penis size of men from all over the world
Khloe Kardashian has JUST confirmed she is pregnant
You may also like
4 weeks ago
Dublin drive-in cinema re-opening this month with stellar selection of movies
3 months ago
Deliveroo workers in Dublin seek meeting with Gardaí over threat of knife attacks
3 months ago
Central Bank to become the new headquarters for Pokemon
3 months ago
Teenage boy stabbed to death in Dublin
5 months ago
3 Dublin Christmas markets we're dying to check out this weekend
5 months ago
Singing crowds gather on Grafton Street amid Level 5 restrictions
Next Page