He could be joining the Tiger King behind bars soon.

Doc Antle is a recognisable face across the globe due in large part to his appearance on the Netflix documentary, Tiger King: Murder, Mayhem and Madness, which aired earlier this year. The safari park owner is now being accused of allegedly trafficking lion cubs between Virginia and South Carolina along with another park owner.

According to The Independent, these charges come as a result of a long investigation into the relationship between Doc Antle and Keith Wilson, who owns 'Wilson's Wild Animal Park' in Virginia. The authorities involved have said that both men "trafficked lion clubs between Virginia and South Carolina". 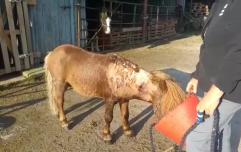 END_OF_DOCUMENT_TOKEN_TO_BE_REPLACED

Tiger King: Murder, Mayhem and Madness is a docu-series released by Netflix in March, it focuses mostly on Joseph Maldonado-Passage (also known as Joe Exotic) a magician/wildlife park owner who is currently serving 22 years in prison for murder-for-hire and other wildlife violations.

Antle has been a vocal opponent to the documentary since its release.

popular
The shows and movies you need to watch before they leave Netflix next month
Someone has ranked the penis size of men from all over the world
'They're Dead To Me Now' - Kate And Oliver Hudson Have Been Disowned By Their Father
WATCH: Paul Mescal and Daisy Edgar Jones's first Normal People audition is stunning
The Queen has banned Meghan Markle from wearing any of Princess Diana's jewellery
If you constantly have a cold nose, this could be the reason why
Trolls target Emma Willis' eight-year-old son over pink clothes and long hair
You may also like
1 year ago
Waterford woman who left pet German shepherd emaciated banned from owning dogs for life
1 year ago
€278k racehorse found starving on Cork farm after weeks of abandonment
1 year ago
Woman investigated for animal cruelty after dumping bag of puppies in Coachella
1 year ago
Bringing home the bacon and similar phrases to be 'banned' as they're offensive to vegans
1 year ago
5 things I learned: the reality of going cruelty-free with your beauty regime
2 years ago
Cavan animal charity forced to put kitten down after she was shoved through letterbox
Next Page