It looks like Rory McIlroy has made his feelings about Irish Olympic Committee President Pat Hickey abundantly clear.

News broke this morning that Hickey was arrested in Rio for his failure to investigate a ticket scandal that resulted in tickets earmarked for Irish fans being sold significantly over face value.

As the news broke, McIlroy tweeted a very vague #Karma which he has since deleted.

Just who could he be referring to in this now deleted tweet... pic.twitter.com/4E6gieJaDR

The tweet could be in reference to the fact that McIlroy chose not to represent Ireland in the Olympics. At the time he attributed his decision to the Zika virus though many suspect the decision came after fallout between the golfer and Hickey over sponsorship.

McIlory is currently contracted to Nike, which have a conflict with the Irish Team sponsors New Balance.

"Before Rory decided whether he'd declare for Team GB or Ireland we put our team gear out to contract," Hickey said at the '100 days to Rio' event in Dublin. 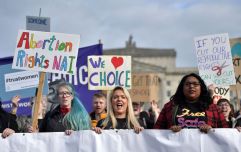 The North is Now: the reaction to abortion and same-sex marriage legalisation was something special

END_OF_DOCUMENT_TOKEN_TO_BE_REPLACED

"Just in case he declared for us, we went to Nike in the UK and told them we might have Rory. But they just dismissed us out of hand and now they regret it, I believe.

@SimonRace @McIlroyRory I think the timing gives away. Zika shmika, it was all about the sponsors

popular
Two women survive 15 hours in the water in Galway Bay
This no bake 'Chocolate Refrigerator Cake' recipe has us drooling
Want a snatched nose? These contouring hacks are making waves online and they're pretty simple!
Irish influencer Lisa Jordan reveals her little boy's name and it's so cute
7 skin care wonders: beauty products I just can't live without in my 30s
This 'Mississippi Mud Pie' recipe is a must-try for chocolate cake fans
Green hair and ripped bikini lines! We have only ourselves to blame for these lockdown beauty disasters
You may also like
3 months ago
ICYMI: Twitter wasn't prepared for Stanley Tucci's cocktail class and may never recover
3 months ago
Wondering how the Gavin & Stacey crew might cope in a lockdown? Twitter has you sorted
6 months ago
Jameela Jamil has come out as queer on Twitter, and serious respect
7 months ago
Woman shares travel adaptor hack that legit has shaken us to the core
8 months ago
These were the most popular tweets in Ireland in 2019
8 months ago
The Queen gives out to Princess Anne for snubbing Donald Trump and we can't stop watching
Next Page