The hotel owner at the centre of a manslaughter investigation over three deaths at a disco in Co. Tyrone is being further held after a suspected Class A drugs seizure.

Police in Northern Ireland are holding the man after a quantity of drugs were found at a house in Moneymore yesterday.

He is suspected of possession with intent to supply, the PSNI said this evening.

Detectives from PSNI’s Major Investigation Team investigating the deaths of three teenagers at the Greenvale Hotel in #Cookstown on Saint Patrick’s Day conducted a search at a house in Moneymore yesterday and seized a quantity of suspected Class A drugs. (1/2) 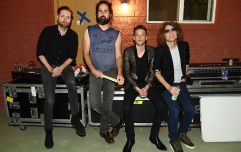 END_OF_DOCUMENT_TOKEN_TO_BE_REPLACED

Michael McElhatton, owner of the Greenvale Hotel in Cookstown, was arrested with another man on suspicion of manslaughter yesterday.

The other man, aged 40, is believed to be a member of door staff.

Three teenagers died at the hotel on Sunday when there was a crush in the queue to get into a disco there.

Lauren Bullock (17), Connor Currie (16) and Morgan Barnard (17) will be laid to rest this Friday, it was announced today.

popular
QUIZ: How well do you remember 13 Going on 30?
QUIZ: How well do you know The Young Offenders?
Staycation: 5 Irish heritage sites we're absolutely hitting up this summer - and they're all free
12 of the best podcasts we listened to during lockdown
Spotted at Penneys: Two cruelty-free dupes for popular makeup brands
Caroline Foran's tips for first-time interior design, when you haven't got a clue where to start
Someone has ranked the penis size of men from all over the world
You may also like
2 weeks ago
Former GAA player Kieran O'Connor passes away following cancer battle, aged 41
2 weeks ago
Naya Rivera's death ruled accidental drowning, says medical examiner
2 weeks ago
Grant Imahara, co-host of Mythbusters, has died aged 49
2 weeks ago
"What a force you were": Tributes paid to Glee actor Naya Rivera
3 weeks ago
Body found in search for missing Glee star, Naya Rivera
3 weeks ago
Katie Price's son Harvey taken to intensive care at risk of organ failure
Next Page