The Oscar-winning actor was born in the town where the Robb Elementary shooting took place.

Actor and activist Matthew McConaughey has called for more gun responsibility measures to be implemented following a school shooting in his birthplace.

The Oscar winner was invited to the White House to discuss the measures following the shooting at Robb Elementary School, which saw two teachers and 19 students killed by 18-year-old Salvador Ramos, before he was shot dead by police.

END_OF_DOCUMENT_TOKEN_TO_BE_REPLACED

McConaughey gave an impassioned speech in the White House press room on Tuesday (7 June), slamming his fist at certain points during his comments.

"To make the loss of these lives matter," McConaughey began.

"My wife and I, Camila (Alves), we spent most of last week on the ground with the families in Uvalde, Texas, and we shared stories, tears, and memories.

"The common thread, independent of the anger and the confusion and sadness, it was the same: How can these families continue to honor these deaths by keeping the dreams of these children and teachers alive?"

END_OF_DOCUMENT_TOKEN_TO_BE_REPLACED

McConaughey emotionally described meeting the parents of some of the children who were killed on 24 May.

"We also met Ana and Dani - Danilo, the mom and the stepdad of nine-year-old Maite Rodriguez," McConaughey said.

"And Maite wanted to be a marine biologist. She was already in contact with Corpus Christi University of A&M for her future college enrollment. Nine years old.

"Maite cared for the environment so strongly that when the city asked her mother if they could release some balloons into the sky in her memory, her mom said, 'Oh no, Maite wouldn’t want to litter.'

"Maite wore green high-top Converse with a heart she had hand-drawn on the right toe because they represented her love of nature.

McConaughey's wife Camila Alves was holding the shoes during the press conference. 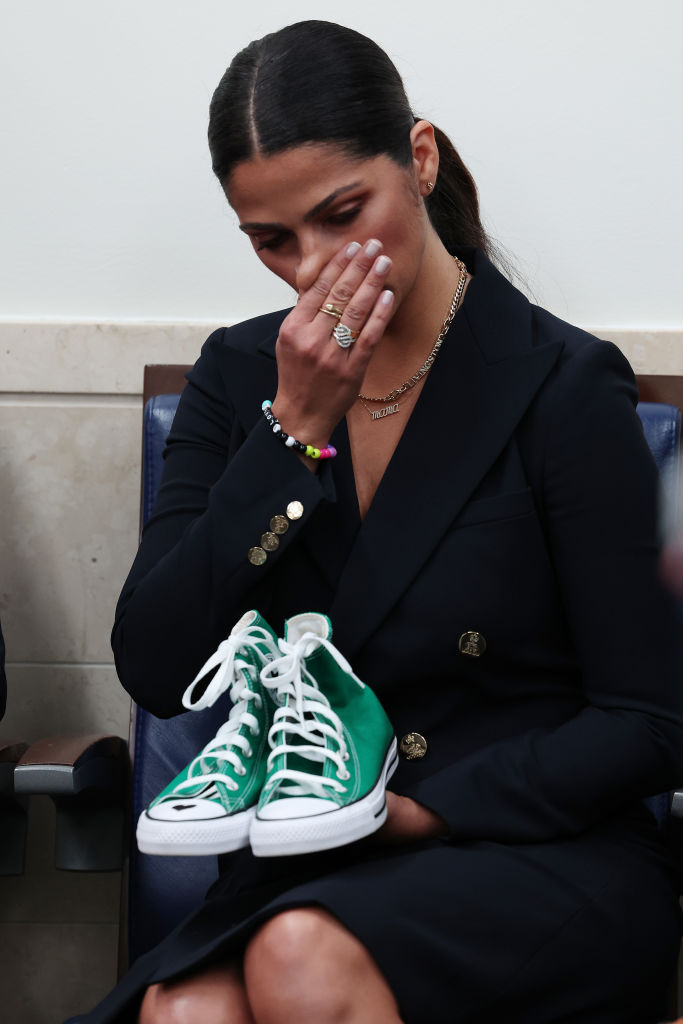 "Wore these every day. Green Converse with a heart on the right toe. These are the same green Converse on her feet that turned out to be the only clear evidence that could identify her after the shooting. How about that?"

McConaughey said that the moment should be used to pass new legislation that would create a safer country without infringing on the US Constitution's Second Amendment, which gives Americans the right to bear arms.

"So where do we start? We start by making the right choices on the issue that is in front of us today.

"We start by making laws that save innocent lives and don’t infringe on our Second Amendment rights. We start right now by voting to pass policies that can keep us from having as many Columbines, Sandy Hooks, Parklands, Las Vegas's, Buffaloes, and Uvaldes from here on.