Together for Yes has called today "a moment of profound change" for Ireland.

Voting tallies are this afternoon suggesting that Ireland has voted overwhelming in favour of repealing the eighth amendment.

Early exit polls released on Friday night from RTE and The Irish Times also predict that almost 70 percent of the Irish public has voted in favour of repealing the eighth.

Co-Director of Together for Yes, Ailbhe Smyth, said:

"This is a vote for dignity and decency. If exit polls are reflected in the official vote count later today, this will be a moment of profound change in Ireland’s social history, a moment when the nation collectively stood up for women and for their healthcare, and voted for constitutional change.

"As the national civil society campaign to repeal the 8th, Together For Yes always knew that Ireland was ready for this change, because of the evidence and facts showing the harm and the pain of the 8th amendment." 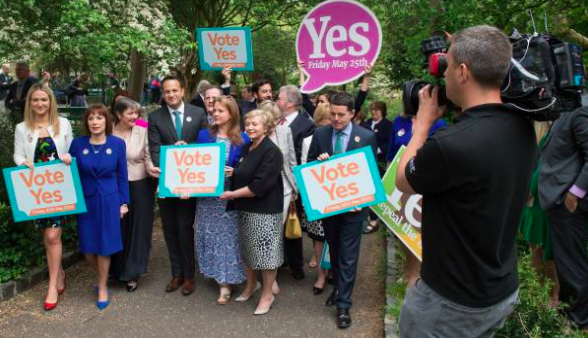 Smyth also said that the group wanted to create a space where "people could discuss abortion in a safe and comfortable way, which recognised this was a difficult, complex and sensitive matter, and that it wasn’t black and white."

Save the 8th have also released a statement following the tallies and last night's exit polls.

They called yesterday "a tragedy of historic proportions."

"The 8th amendment did not create a right to life for the unborn child – it merely acknowledged that such a right exists, has always existed, and will always exist.

"What Irish voters did yesterday is a tragedy of historic proportions. However, a wrong does not become right simply because a majority support it."

An official result is expected later this afternoon.

popular
Women are rinsing their hair in apple cider vinegar – and the results are amazing
YouTube star Melanie Ham dies after cancer battle aged 36
New photo of Bernadette Connolly released as investigation continues
"Hair contouring" is about to be huge, here's everything you need to know
Toddler dies after being struck by vehicle in Co. Cork
Damian Lewis pays touching tribute to late wife Helen McCrory with Irish poem
Worried about a loved one? Here are 5 signs of suicide to look out for
You may also like
9 hours ago
Only Fools and Horses' Patrick Murray has cancerous lung tumour removed
2 days ago
DSPCA urges pet owners not to forget their dogs as they return to office
2 days ago
17 people dead in tragic nightclub fire in Cameroon
2 days ago
Ireland likely to be hit with "more Covid variants" over next few months
3 days ago
Woman hospitalised following stag attack in Co. Kerry
1 week ago
Man arrested on suspicion of murder of Ashling Murphy
Next Page