WhatsApp to introduce 'self-destructing messages' in 2020

It is just one of a number of new features to arrive on the messaging app next year.

According to WABetaInfo, a tech site specifically dedicated to doing deep dives on new apps and updates in search of interesting additions, WhatsApp will be rolling out self-destructing messages to their messaging app in 2020.

Initially referred to 'Disappearing Messages', and now renamed 'Delete Messages', the function will allow users to set a time-stamp for when they'd like messages to be deleted on the app: one hour, one day, one week, one month, or one year. 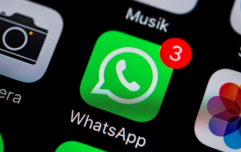 END_OF_DOCUMENT_TOKEN_TO_BE_REPLACED

Given that you can delete messages on the app after sending them right now, as well as any and all messages being captured in screengrabbing, we're not quite sure what the real functional use of the self-destructing messages would be, but we're more than willing to find out.

Additionally, the folks at Tech Radar have stated that users should finally expect the Dark Mode to be rolled out on the app in the new year, which can be changed over manually, or set to kick in automatically once the battery goes into power saving mode.

Other new additions to the app expected in 2020 include the arrival of ads on WhatsApp Stories, in much the same way they currently are part of the feed on Instagram and Facebook Stories, as well as a 'Reverse Image Search', which will allow users to find out where forwarded images have originated from.

Girls With Goals || Her · Ep.151: 'A Story Shared' - Aoife P. Rafter on blogging during a pandemic and living with CF
popular
Status Yellow snow warning issued for five counties
Adam King is going to be on the Late Late Show tomorrow
'I loved it': The childhood drug addiction that inspired The Queen's Gambit
The son in The Undoing is the real life child of Corrie star Katy Cavanagh
Body found near I'm A Celebrity's Gwrych Castle
Miley Cyrus says she will "always" love ex Liam Hemsworth
Hugh Grant confirms shots were cut from The Undoing finale
You may also like
10 months ago
WhatsApp to stop working on millions of phones as of today
10 months ago
The handy WhatsApp hack that lets you read texts without blue-ticking the sender
11 months ago
Bad news! WhatsApp will stop working on certain phones from TOMORROW
1 year ago
Curtis Pritchard is head over heels for Maura Higgins, as you can see from his latest WhatsApp
1 year ago
New WhatsApp update stops people adding you to pointless group chats
1 year ago
'OK' hand sign added to list of hate symbols
Next Page