We invited the Taoiseach on Girls With Goals recently and he did not disappoint.

It's not the first time we've entertained high-ranking politicians on our show, our health minister Simon Harris and Sinn Fein leader Mary Lou McDonald have both provided insights into the world of law-making and politics in the past, but when the leader of the country comes knocking... the pressure is certainly on.

Keeping with show tradition, we began with our game 'Six words or less', it's a fan favourite with a certain Ronseal appeal. The guest simply describes themselves in six words or less and it's for our readers and listeners of the show who may not know who you are.

END_OF_DOCUMENT_TOKEN_TO_BE_REPLACED

Now, it's fair to say that you'd be hard pushed finding anyone in Ireland who doesn't know who the leader of our government is, but we are an equal opportunities show and we treated Mr.Varadkar like anybody else (albeit we all dressed a little better than usual).

He delivered his six words while chuckling away, bemused by the question or his revelations we don't quite know, but his words were refreshingly honest; 'Optimist, serious, fitness fan, music fan, impatient, hard exterior but soft interior'.

Yes... he went over the six words requested, but he's the Taoiseach, so we let him off!

Great experience interviewing Taoiseach Leo Varadkar today. He went way over the ‘6 words or less’ limit, but he’s the leader of the country so I let him off! Coming soon #GirlsWithGoals . . . . . . . . . #GenderEquality #GirlsWithGoals #broadcast #genderpaygap #childcare #Ireland 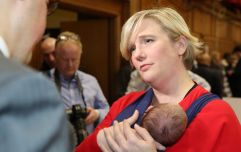 END_OF_DOCUMENT_TOKEN_TO_BE_REPLACED

With pleasantries out of the way it was down to business. European Equal pay day fell on November 3rd this year. It means that for the remainder of 2018 due to the gender pay gap, women in Europe are essentially working for free.

The European Commission marked November 3rd in order to to draw attention to the wage gap and discuss the ramifications it has for women across the continent.

According to the commission, the pay gap is not just unfair in principal, "but also in practice."

"It puts women in precarious situations during their careers," a statement reads, "and even more so after they retire, with a gender pension gap of 36.6 percent."

"While there is no instant solution to fix this inequality, there are ways to bring about concrete change. The Commission has put a number of proposals on the table to address this issue in the workplace and at home."

END_OF_DOCUMENT_TOKEN_TO_BE_REPLACED

So, how is Ireland faring when it comes to the gender pay gap? A draft labour bill, championed by Senator Ivana Bacik, was passed through the Seanad just last month, the bill will require companies with more than 50 employees to reveal details of any gender pay gap among its employees.

Although amendments are expected, it seems that the mandatory reporting of gender pay gaps in Ireland could be a requirement by law in the first half of 2019.

We put this to the Taoiseach in order to find out more about these impending laws and amendments that are (hopefully) coming down the line sooner rather than later.

Listen in to the full episode below or keep reading for more:

The Taoiseach discussed with us how we've had equal pay for equal work here in Ireland for a long time, the laws have been in place for at least 'twenty or thirty years', despite this he admitted that there is a gap between what the average woman is paid and the average man. He explained that there's a lot of different reasons for that which have developed over time. Despite this the Government's goal when it comes to the gender pay gap is clear:

'One of the things that we want to do as a Government is bring in the first law that Ireland's ever had around gender pay equality. It will require that employers publish their gender pay gap and explain why it is, sometimes there may be an explanation, maybe that their female staff are more likely part-time than full-time different things like that but if there isn't a legitimate explanation we want to know why, we want to name and fame the good employers who are paying their male and female staff the same and name and shame and embarrass those who aren't'.

Yesterday was a historic day at Maximum Media.

You can read more about his visit here - https://t.co/bxm189bFRQ pic.twitter.com/SNn3xqoaKy

The Taoiseach went on to say that if we're going to achieve gender pay equality in this country a crucial component would be making sure that more women are promoted.

'You'll often see in a huge number of organisations as you go up the ranks that there are fewer women and that's what gives rise to the pay gap in a lot of cases'.

It was a pleasure to discuss women's issues with the Taoiseach, and here at Her we're certainly looking forward to laws that continue to enforce equality across the nation.