"These women are highlighting key privacy violations within Direct Provision, a system widely acknowledged as a human rights scandal."

Today sees the launch of a new campaign from a group of women living in Direct Provision who are calling for their right to privacy to be respected.

The My Rights, My Privacy campaign sees the women outline a number of concerns regarding human rights and privacy while living in the accommodation system. It is supported by AkiDwA and Action Aid Ireland.

END_OF_DOCUMENT_TOKEN_TO_BE_REPLACED

There are currently 34 Direct Provision centres in Ireland, and since its introduction as an emergency measure in 1999, many groups have called for it to be stopped, with rights groups describing the conditions as degrading and inhumane.

The campaign outlines some of these concerns, pointing to the "opening of private letters, unannounced inspection of rooms, and more than two people being asked to share a room together".

The women are now asking the Irish Government to implement rules that would see their rights to privacy enshrined.

Specifically, they are calling for Direct Provision management to stop opening private correspondence sent to residents, to remove curfews and requirements relating to signing in and out of the centre, to stop unannounced room inspections and to ensure that no more than two people who are non-family members share a room. 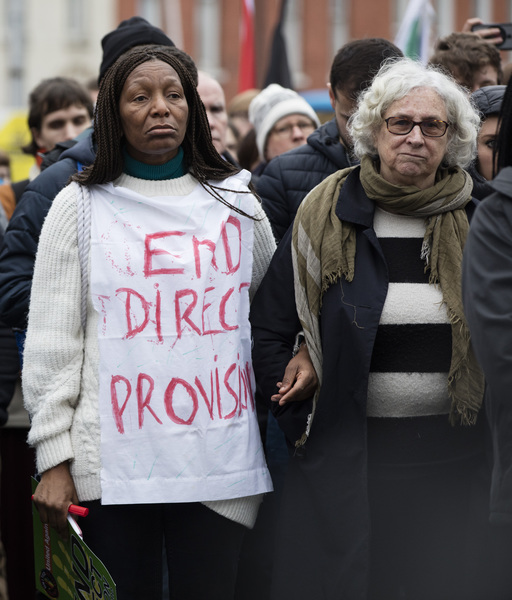 END_OF_DOCUMENT_TOKEN_TO_BE_REPLACED

The campaign points to the case of one pregnant woman who was forced to share a bathroom with five other people. This meant that she could not always use the bathroom when she needed to, a factor that she attributes to the miscarriage she subsequently suffered.

Launching the campaign, the CEO of AkiDwA Salome Mbugua said: "We must act in the best interest and support these women, majority of them has experienced abuse and suffered a lot before arriving in Ireland, the issues they articulate which takes away their dignity seriously need to be acted upon as matter of urgency, the government must ensure women seeking international protection are fully protected and their human rights are upheld."

END_OF_DOCUMENT_TOKEN_TO_BE_REPLACED

Karol Balfe, meanwhile, who is the CEO of ActionAid Ireland said: "These women are highlighting key privacy violations within Direct Provision, a system widely acknowledged as a human rights scandal. The My Rights, My Privacy campaign was led and developed by women within Direct Provision across the country. We welcome the commitment to end Direct Provision by the Irish Government, but we cannot long-finger addressing these unacceptable issues."