Twitter users compared the pyjama shirt to the uniform worn by Jewish prisoners in concentration camps during World War II.

The blue and white striped shirt features a six-pointed yellow star on the front. The word "sheriff" is written on the star but this was not clear in the zoomed out images available on the brand's website. 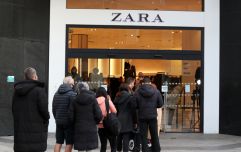 Zara customers will now have to pay to return clothes

END_OF_DOCUMENT_TOKEN_TO_BE_REPLACED

Israel journalist Dimi Reider commented on the shirt in a piece for 972mag.com, writing: “It’s a SHERIFF shirt for your three-year-old. Obviously. What else could it be? Why, what else does it remind you of?”

The item in question was available to buy in a number of countries including the UK, Israel, France, Denmark, Albania and Sweden.

The online retailer has since apologised via Twitter and the shirt is no longer for sale.

@eylanezekiel We honestly apologize, it was inspired by the sheriff’s stars from the Classic Western films and is no longer in our stores

popular
Bride asks for divorce day after wedding following groom's disrespectful cake stunt
Molly Mae shuts down backlash over her baby girl's name
Expert team end search for Nicola Bulley declaring she’s not in the water
Emma Pattison made distressed call to her sister before murder-suicide
Brother and sister abducted in March 2022 have been found alive
Madonna calls out "ageism and misogyny" following Grammys appearance
Natalie Imbruglia's Torn is actually a cover and the original just isn't the same
You may also like
2 weeks ago
Love Island fans accuse Olivia and Zara of creating fake drama for the cameras
4 months ago
Kaia Gerber has dropped a collab with Zara and it's everything
5 months ago
The Queen of Spain just wore this €39 Zara dress – and now we all want it
5 months ago
Here are the Zara perfumes made by Jo Malone
7 months ago
When will clothing stores learn we don't all have small chests?
8 months ago
This simple TikTok hack proves we have been using the Zara website completely wrong
Next Page