QUIZ: How well do you really remember the first episode of Grey's Anatomy?

It's been a very long time since Grey's Anatomy began.

Ever since then, just about every single thing imaginable has happened to the staff members at - wait, no, I mean, Grey Sloan Memorial.

The first episode, all the way back in 2005, introduced us to the lives of Meredith Grey and the rest of her intern doctor pals. 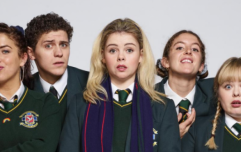 QUIZ: How many of these Derry Girls characters can you name?

END_OF_DOCUMENT_TOKEN_TO_BE_REPLACED

And while there's been plenty of casting shakeups along the way (like when fans said farewell to McDreamy, Lexie, April and Arizona - just to name a few), it's still basically as addictive as ever.

So, we decided to put our (and your) Grey's Anatomy knowledge to the test - particularly when it comes to the first episode of the series.

It's time to put your knowledge to the test: how well do you really remember the first episode of Grey's Anatomy?

popular
Women are rinsing their hair in apple cider vinegar – and the results are amazing
Worried about a loved one? Here are 5 signs of suicide to look out for
FBI reveal that Brian Laundrie is responsible for Gabby Petito's death as they discover notebook
Bottleneck bangs: They're in and they're cuter than you think
And Just Like That... episode 8: Nobody saw this one coming
Woman hospitalised following stag attack in Co. Kerry
Emmerdale actors Max Parker and Kris Mochrie announce engagement
You may also like
3 days ago
Netflix shares more pictures from Bridgerton season 2
4 days ago
The third and final season of Happy Valley is in the works
1 week ago
Here is everything we know about the Desperate Housewives reboot
1 week ago
Cheer season 2 further highlights the vulnerability of its young stars
1 week ago
Desperate Housewives could be coming back - but what could we expect from a reboot?
3 weeks ago
10 of the best on-screen fashion moments from 2021
Next Page