It's been 23 years since it first hit shelves.

Harry Potter and the Philosopher's Stone was just the first step in a magical journey that has now spawned seven books; eight films; a stage adaptation and a spin-off series.

Not to mention the theme parks - which are just really, really fun. 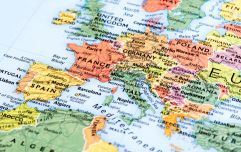 QUIZ: We bet you can't get full marks in this extremely frustrating geography quiz

END_OF_DOCUMENT_TOKEN_TO_BE_REPLACED

The first book introduced us to the world of witchcraft and wizardry, Hogwarts - and, of course, The Boy Who Lived.

And, thankfully, it's just as magical as ever.

So we decided to put your Harry Potter knowledge to the test this week and see how well you can remember the book version of Harry Potter and the Philosopher's Stone?

And remember: there were some changes made in the transition from the page to the screen, so this may be a bit trickier than you think.

Like, what did Hermione really say to Ron when she was correcting his work in Charms class? And can you remember when Harry first got Hedwig?

It's time to take our quiz and find out - and good luck!

popular
Love Island's Gemma finally tells villa about dad Michael Owen on TV
Parent's Benefit Leave in Ireland is being extended from today - here's what you need to know
Love Island: Danica sets her sights on Andrew as Luca asks Jacques about his relationship with Gemma
10 stunning and affordable outfits that are perfect for a summer wedding
Irish girls name was the most used Irish name in the United States last year
Drama series about Maxine Carr and Ian Huntley is filming in Dublin
Love Island fans lose it over Indiyah's question about Ireland
You may also like
1 week ago
5 books by female authors we're dying to read this summer
2 weeks ago
Love Island star Yewande Biala opens up about mental health on the show in new book
1 month ago
WATCH: The trailer for Everything I Know About Love is finally here
2 months ago
10 excellent new thriller books to pack in your holiday suitcase this year
3 months ago
WATCH: The trailer for Where the Crawdads Sing is here
4 months ago
WATCH: The trailer for Conversations with Friends is finally here
Next Page