Ciara Mageean has secured herself a place in the final of the 1500 metres at the World Athletics Championships.

The Co. Down sportswoman came fifth place in yesterday's semi-final in Doha, ensuring an automatic qualification to the upcoming final. 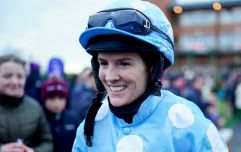 END_OF_DOCUMENT_TOKEN_TO_BE_REPLACED

She finished with an impressive time of four minutes 15.49, making her the first Irish woman to qualify for the World Championship final since Sonia O'Sullivan in 1997.

Mageean told RTÉ Sport that she is "ecstatic" to have won a place in the final.

"It's my first world final. I have worked a long time to get to this stage and I may seem ecstatic - I still have another race to go - but I ran that saying 'that's going to be my final'.

"To have an Irish vest in a World Championship final - we don't often have it - and I'm absolutely over the moon." 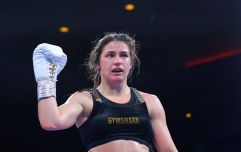 END_OF_DOCUMENT_TOKEN_TO_BE_REPLACED

Athletics Ireland have offered their congratulations to Mageean as the second ever Irish woman to make the 1500m final.

The World Athletics Championship final is due to take place on Saturday, October 5 at 6.55pm Irish time.

popular
A clip has resurfaced of Machine Gun Kelly discussing a teenage Kendall Jenner
People are only realising Kendall Jenner and Gigi Hadid are related and the reactions are gas
Worried about a loved one? Here are 5 signs of suicide to look out for
Seems sudden? This is why the restrictions have completely lifted this soon
FBI reveal that Brian Laundrie is responsible for Gabby Petito's death as they discover notebook
These are the top baby names for 2022
A documentary about two Irish boys who skipped school to go to New York is coming soon
You may also like
12 hours ago
More than 2/3 of male football fans harbour misogynistic view of women's sport, study finds
1 week ago
Olympic sprinter Deon Lendore dies aged 29
3 months ago
Olympian and world champion runner Agnes Jebet Tirop found dead in home
4 months ago
Katie Taylor reigns supreme after defending lightweight title at Leeds
4 months ago
Ellen Keane wins gold in 100m breaststroke at Paralympics
4 months ago
Women's Afghan football team evacuated safely from Kabul
Next Page