An all-male panel celebrated a women in football ceremony

The event was held to mark a historic women's match, but no female representatives were seen in the photos.

An event held to celebrate women in football is receiving backlash for not having any female representatives at the ceremony.

As The National reports, a plaque was presented to mark the 50th anniversary of the first ever women's team match between England and Scotland, which took place on Saturday 18 November 1972. 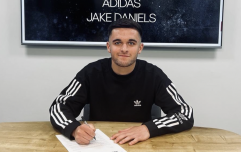 Footballer Jake Daniels applauded for coming out as gay

END_OF_DOCUMENT_TOKEN_TO_BE_REPLACED

At the commemoration event, which took place on 11 February, Paul McNeil, of the Scottish Football Association presented the plaque to Tommy Sutherland, who is the club chairman for Greenlock Juniors Football Club, and to Jim Laughrey, who is a player and supporter of the club.

The event was also attended by Councillor Tommy McVey and Stuart McMillan, a member of Scottish Parliament.

The club added that there will be a formal unveiling of the plaque at a later date, and they said that the commemoration will be celebrated with an U15 girls match between Scotland and England at the Ravenscraig Stadium in May.

Football history was made today earlier at Ravenscraig. It is almost 50 years since the first woman’s full international between Scotland and England was played at the stadium. pic.twitter.com/p4Odo7kdnV 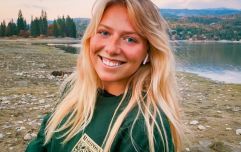 END_OF_DOCUMENT_TOKEN_TO_BE_REPLACED

While some welcomed the plaque celebrating the historic women's match, many took to Twitter to express that it was frustrating that there were no female representatives at the initial ceremony.

One commenter on social media wrote: "It's great that the historic occasion is being recognised, but it would have been good to have had some local girls or woman footballers involved in the photo op?"

Another wrote: "I adore the folk in this pic, but it's a great example of the blind male privilege. So many amazing women that could have been in these photos to celebrate this history. There is no excuses here, just lack of equality."

A third said: "No actual women were available for this photo opp? Were they even asked?"

Someone else said that the photo opportunity exhibited a "complete lack of self-awareness".

popular
Are we getting a mini heatwave in September?
Vogue Williams slams man who refused to swap seats with her on plane
Greg O'Shea actually left Love Island to go to his granny's funeral
Green Party representative calls for a temporary ban of stag and hen parties in Ireland
Scarlett Moffatt slams 'disgusting' pap for sneaking into hotel to take photos of her
Ryanair, easyJet and BA issue warning to anyone boarding with smart bag
Katie Piper rushed to hospital for emergency eye surgery
You may also like
2 weeks ago
"I didn't do it": Rebekah Vardy sobs in TV interview after Wagatha Christie defeat
2 months ago
Gerard Pique and Shakira announce they have split after 11 years
6 months ago
Coleen Rooney says she's learned to 'live with' Wayne's cheating but they're not 'lovey dovey'
6 months ago
More than 2/3 of male football fans harbour misogynistic view of women's sport, study finds
10 months ago
Paul Mescal is donating those GAA shorts to a local club
11 months ago
FAI introduce equal pay for women and men's football teams
Next Page