Simone Biles wore GOAT leotard to "hit back at the haters"

"Let's make the haters hate it and the fans love it."

Simone Biles has shared the meaning behind her latest leotard choice, and the message it sends to her critics.

Biles, who is widely considered to be the one of the greatest gymnasts of all time, wore a leotard with a goat bedazzled on the back to a recent competition. 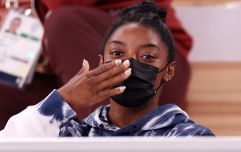 Simone Biles will return for her final Olympic event

END_OF_DOCUMENT_TOKEN_TO_BE_REPLACED

In an interview with Marie-Claire, Biles said that the goat represents the term "Greatest of all time", a phrase that is regularly used to describe athletes of her calibre.

"The idea was to hit back at the haters," she said. "I didn't feel like it was necessarily fair how they could keep saying whatever they wanted, but then if I said something, it wasn't fair."

She added that her critics mocked her and suggested she put a goat on her leotard.

"And then I was like, 'That's actually a good idea. Let's make the haters hate it and the fans love it.'"

The gymnast added that people shouldn't be ashamed of "being good or great at something". 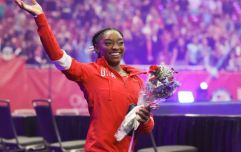 END_OF_DOCUMENT_TOKEN_TO_BE_REPLACED

Last month, Biles made history as she landed a move never before completed by a female gymnast in competition.

At the US Classic in Indianapolis, Biles performed the Yurchenko double pike. This vault move involves a round-off onto the springboard followed by a back handspring with a back twist onto the vault, and a double pike flip.

It's quite safe to say that Biles is in fact the GOAT when it comes to gymnastics. At the 2016 Olympics, she dazzled audiences during her events and won four gold medals and one bronze medal. On top of that, she has won 25 World medals, 19 of which are gold. She also holds the record for most all-around titles at the World Championships.

As the Summer Olympics in Tokyo approaches, we cannot wait to see what Simone Biles has in store for us.

popular
Friends Star James Michael Tyler Files For Divorce
Late Late Show viewers are not happy with Ryan's questions for Billy Connolly
Apparantly, there is one colour you should never wear at a job interview
Friends actor James Michael Tyler has died, aged 59
10 items from Zara for the perfect autumn capsule wardrobe
9 of the best horror movies on Netflix this Halloween
Say hello to fairy hair, the dreamy new trend popping up all over social media
You may also like
5 days ago
Emma Slevin is the first Irish gymnast at the World Gymnastics Championships all-arounds finals
1 month ago
Simone Biles to testify over FBI's handling of convicted sex offender Larry Nassar
2 months ago
Simone Biles pulls out of all-around Olympics final due to mental health
2 months ago
Simone Biles forced to drop out of Olympics team final due to injury
2 months ago
German gymnasts wear full-body unitards in stand against sexualisation
4 months ago
Simone Biles scores another record winning seventh national championship
Next Page