Katie highlights the determination, perseverance and strength of character it took for the athlete to succeed.

Women's sporting icon, Katie Taylor has enjoyed many career highlights since her debut title fight in 2005.

The thirty-two-year-old began boxing when she was just eleven, where she was coached by her father alongside her two older brothers. Her humble beginnings training with St Fergal's Boxing Club, which operated out of a former boathouse in Bray quickly began to evolve into something bigger when Katie fought her first officially sanctioned female boxing match in Ireland at the National Stadium and defeated Alanna Audley. 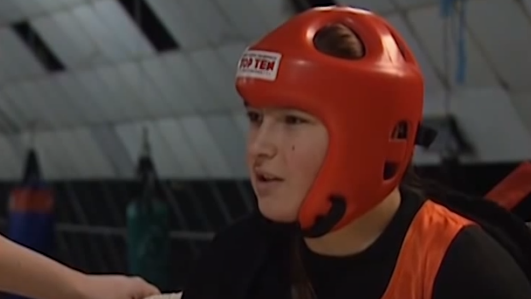 END_OF_DOCUMENT_TOKEN_TO_BE_REPLACED

After the devasting blow of the Rio Olympics, many people questioned if her boxing career was over and the famously private champion agreed to let a small crew document her rebuild her career.

Katie is directed by Ross Whitaker, who has previously worked on Unbreakable: The Mark Pollock Story, and the new documentary intimately follows Taylor through some very testing moments.

The phenomenal trailer gives us a glimpse into the fractious relationship Katie had with her father and former trainer, Peter Taylor.

And the film reveals even more shocking truths, such as the fact that Katie had to pretend to be a boy to pursue her sport. A press release for the film states:

"Few people know that Taylor had to pretend to be a boy as a young boxer because girls weren't allowed to box in Ireland at the time. Taylor also had to bang down the door of the Olympics to get female boxing into London 2012, where she famously won the gold medal."

The film has received high praise since its release and has been lauded by the likes of Sonia O'Sullivan and Derval O'Rourke.

The @KatieTaylor documentary is incredible viewing. Such a raw & honest insight. Find where it’s on & watch it.
Bonus that @rosswhitakertv was doing a Q&A after it was shown in Cork ?
Well done, superb doc. pic.twitter.com/IsZz5oDuRJ

The film has even been praised for carrying a feminist banner, as many people see Katie as a great role model for girls.

Katie is in cinemas now and we certainly know what we'll be doing for the weekend.

popular
Vicky Phelan says terminally ill people should have right to decide how to die
The internet is saying the same thing after Ryan's Toy Show opening
The best memes from this year's Late Late Toy Show
Omicron variant symptoms are mild so far, says doctor who discovered it
8 of the hottest make-up trends to try this festive season
We finally know what happened to Sam in And Just Like That
What is the 'yassify' trend and why is everyone doing it?
You may also like
1 year ago
BBC broadcaster Holly Hamilton: "It feels like the soul has been taken out of sport"
1 year ago
Maxine O'Sullivan: "People don’t talk about the mental side of horse racing"
1 year ago
Brazil's female footballers to be paid the same as men
1 year ago
Greta Streimikyte: “I'm visually impaired but I never let that get in the way of my sport"
1 year ago
Gina Akpe-Moses: "This has been an awakening for black people"
1 year ago
Irish Rugby's Hannah Tyrrell on Pieta House's new initiative and the importance of asking for help
Next Page