Only four weeks to go.

Excitement is building for the Galway Races as the launch party took place on Monday afternoon. It all kicked off with the announcement that Her is sponsoring the Best Dressed Lady competition, with Gillian Fitzpatrick, Rosanna Davidson and Síle Seoige all coming on board to judge the event.

This year, the judges are promising to move away from the norm as they want to find someone that goes outside of the box and has come up with an alternative way of dressing for Ladies Day. 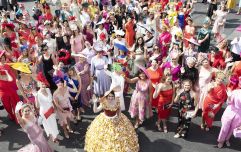 The results are in! Introducing this year's Her Best Dressed winners at the Galway Races

END_OF_DOCUMENT_TOKEN_TO_BE_REPLACED

Rosanna told us what she's looking out for, saying that she would prefer an outfit with a tale behind it. She said: "We're looking for someone who looks comfortable with what they're wearing, we would love if there's a story behind their outfit or if they've made their hat or found their gloves in their granny's attic. Just a really unique individual.

"I love colour as well, especially for summertime so I'll be looking for a pop of colour too."

Síle added: "What I love at the moment is that it feels like anything goes... that would be a message we would like to encourage, that we don't want people playing it safe.

She continued: "We don't want people to think that they have to go the 'racing outfit look'. It's not about that, it's about your sense of style. In fact, if you're different that's a really good thing. It means you'll stand out."

Gillian expressed the same views, saying that she will try to move away from the "structured" race day look that we're all so used to seeing.

"I don't think that people should be excluded from entering a Ladies Day event just because they're not embracing that very structured look and feel, so I feel like let's open the floodgates and let's see what we have on August 1!"

If you want to check out how the launch party went on Monday, check the video out below: