As gorgeous as ever.

Caroline Flack has just shared the first look at her new collaboration with River Island and we're already obsessed.

The presenter posted a shot of herself in a tiger print beach-inspired co-ord this afternoon teasing the launch of her collection.

END_OF_DOCUMENT_TOKEN_TO_BE_REPLACED

Caroline, 39, is back working with the brand for the second year, injecting her signature girly sense of style into River Island's summer offering.

The pieces arrive in store tomorrow, just weeks before Caroline returns to screens as the host of Love Island.

It has been confirmed that the new series will kick off on Monday 3 June on ITV2.

While none of this year's contestants have been revealed, there's been a lot of speculation that some semi well-known faces will appear this year. 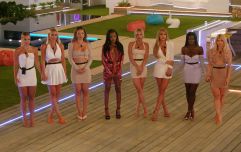 END_OF_DOCUMENT_TOKEN_TO_BE_REPLACED

Among those tipped for the villa is Curtis Pritchard, brother of Strictly pro dancer AJ Pritchard.

"He’s a lovely bloke with a great sense of humour so is sure to be a hit with the ladies," a source said.

"They are also hoping that he will bring some sexy salsa moves to the villa.”

Also rumoured to have landed a place on the show is Soph Piper, sister (and absolute doppelgänger) of The Saturdays singer Rochelle Humes.

An insider said; “Soph is the perfect islander – she’s incredibly beautiful and loves meeting new people after already doing a season in Ibiza."

popular
FBI reveal that Brian Laundrie is responsible for Gabby Petito's death as they discover notebook
Actress Regina King pays tribute to her son as he dies suddenly
Lisa Fallon praised as she opens up about terrifying ordeal on Late Late
A documentary about two Irish boys who skipped school to go to New York is coming soon
People are only realising Kendall Jenner and Gigi Hadid are related and the reactions are gas
Ben Foden explains why he called Rachel Stevens "sexiest woman alive"
A clip has resurfaced of Machine Gun Kelly discussing a teenage Kendall Jenner
You may also like
2 days ago
Love Island's Amber Gill could be banned from Instagram over ad controversy
4 days ago
Fans convinced Love Island's Chloe inspired new Kanye track
1 week ago
Love Island's Chloe Crowhurst is pregnant with her first child
1 week ago
Opinion: The takedown of Molly-Mae: Should cancel culture be this gleeful?
1 week ago
Molly Mae Hague personally apologises for controversial comments
1 week ago
Love Island now open to non-binary contestants
Next Page