Last month, it was confirmed that Declan Donnelly and his wife Ali were expecting their first child together.

And on Sunday evening, the pair hit the BAFTA red-carpet for what is one of the biggest nights of the year for small-screen stars. 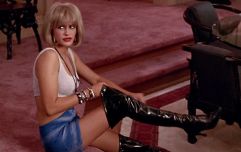 11 Halloween costumes that nobody else will be doing

END_OF_DOCUMENT_TOKEN_TO_BE_REPLACED

Ali opted for a full-length metallic silver gown and a simple black clutch. She kept hair and make-up fairly classic and accessories to a minimum too.

Dec wasn't joined by his side-kick, Ant McPartlin - who is still recovering following his arrest for drink-driving in March.

Still, the hosting duo are up for the likes of Best Entertainment Programme - for both Saturday Night Takeaway and Britain's Got Talent. Sue Perkins is hosting the ceremony.

Last month, a source close to the Dec, 42, and Ali, 39, said the pair were “delighted to be expecting - especially since they have been trying for some time”.

"They have both always wanted a family but worried that it might not happen for them," the same source added in conversation with The Sun.

"They have been keeping the pregnancy a closely guarded secret, but now that Ali is safely over 12 weeks, they are starting to let people know".

Dec and Ali were together for 18 months before marrying in August 2015.

popular
Simon Harris gives three urgent options for easing restrictions next week
Personality QUIZ: Which character from You are you?
Another Strictly star has pulled out of the live show
This TikTok hack shows you how to pack more despite baggage allowance
Addison Rae temporarily banned from TikTok
Tributes paid to Limerick based blogger and model Patrick McLoughney
Lidl closing early this weekend to thank staff for hard work
You may also like
4 days ago
21-year-old mum says people don't believe twin daughters are hers
1 month ago
Can we stop presuming women are pregnant?
3 months ago
Police investigating after pregnant woman found dead and baby "missing"
7 months ago
Pregnant women advised after four preliminary stillbirths linked to Covid in Ireland
11 months ago
You'd give up your seat for a pregnant woman on the bus, wouldn't you?
1 year ago
Vogue Williams and Spencer Matthews have announced that they are excepting a baby girl
Next Page