Disney TV Star Zendaya Gets Her Own Barbie Doll

Actress and singer Zendaya now has her own Barbie doll.

The Barbie, which isn't available for purchase, sports dreadlocks and a replica of the Vivienne Westwood dress Zendaya wore to the Oscars earlier this year.

When I was little I couldn't find a Barbie that looked like me, my...how times have changed. Thank you @barbie for this honor and for allowing me to be apart of your diversification and expansion of the definition of beauty. Can't wait to keep doing amazing things with you??? #besuper @luxurylaw @theshelbyswain 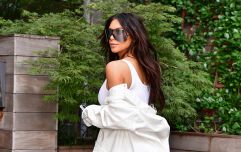 There are absolutely no words for Kim Kardashian's new footwear

END_OF_DOCUMENT_TOKEN_TO_BE_REPLACED

Judging by her Instagram posts, the Disney star is delighted with the doll which was displayed at the Barbie Rock ‘N Royals Concert Experience in Los Angeles on Saturday night.

Earlier this year, Fashion Police's Giulana Rancic caused controversy when she remarked on Zendaya's dreadlocks at the Oscars, saying: “I feel like she smells like patchouli oil and weed".

Although the TV personality later apologised, Fashion Police suffered in the aftermath with Giulana's co-hosts Kelly Osborne and Kathy Giffin leaving the show.

popular
Wagatha Christie: Rebekah Vardy storms out of court just 30 minutes into final day
Only a matter of time before monkeypox spreads to Ireland, says expert
Claire Byrne Live viewers in shock as woman shares family DNA secret
Why Are Men so Obsessed With Boobs? The Answer is Pretty Surprising...
Surprise! Ed Sheeran announces he and wife Cherry have welcomed baby #2
How to INSTANTLY unblock your stuffy nose (we swear this works)
Here Are The Top 20 Most Common Pin Codes in The World
You may also like
1 month ago
Joss Stone pregnant after experiencing pregnancy loss last year
1 month ago
Emeli Sandé supported by fans as she shares first snap of new girlfriend
2 months ago
Blue's Lee Ryan weds partner Verity Paris in secret
3 months ago
Alexandra Burke and her Irish boyfriend Darren are expecting their first child
3 months ago
Glee star Jenna Ushkowitz expecting baby girl
3 months ago
Ashley Cain opens up on his mental health after being targeted by trolls
Next Page