Holly Willoughby was accidentally twinning on This Morning.

Yesterday's look proved a very popular one indeed as one of the guests on the show turned up in the very same skirt as Holly.

Paris Fury, who's married to Tyson Fury, joined Holly and Phillip to discuss her family's new show and it wasn't long before people started pointing out the fact that they were wearing the exact same look.

Did Holly Willoughby have the same skirt as Paris Fury on #ThisMorning ??

@thismorning Paris and Holly #twinning with the skirts ???

They were both wearing the Pleated Faux Leather Skirt in a rich burgundy shade and as Holly's fans know, she does love a good midi skirt.

The Zara piece was available on the website yesterday but looks to have sold out since, proving once again just how much fans adore the mum of three's style. 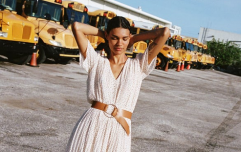 END_OF_DOCUMENT_TOKEN_TO_BE_REPLACED

Although the skirt won't be to everyone's taste, it's a piece that will stand the test of time and one you can wear year in, year out.

It would also look well worn with a shirt and ankle boots or a blazer and sandals, a versatile purchase that can be styled several different ways.

The TV presenter is quite the fan of the Spanish retailer at the minute and even chose a Zara dress for her birthday look on Monday.

Yesterday, Holly's stylist, Angie Smyth, paired the Zara piece with a lightweight knit from H&M and it's refreshing to see the This Morning co-host wear an affordable high-street look.

It appears that she's wearing her favourite Gianvitto Rossi court shoes too, the type of heels that literally work with every ensemble and a worthwhile investment.

Although they're a lot pricier, she's putting sustainable fashion into practice and getting the wear from these beauties.

popular
Kate Middleton has addressed the rumours that she's pregnant with her fourth child
Curtain bangs are trending - here's everything you need to know
Will there be a second season of Gilmore Girls: A Year In The Life? Here's what we know
Someone has ranked the penis size of men from all over the world
QUIZ: Can you name all 32 counties in Ireland in under 4 minutes?
From blonde to brunette - 6 things I wish I knew before going back to my roots
'Beard-baiting' is now apparently a dating trend - and we're all for it
You may also like
4 months ago
Three Zara summer dresses we want in our wardrobes for when the world reopens
5 months ago
This dreamy limited edition Zara dress would be stunning for a summer or autumn wedding
5 months ago
Five Zara buys to brighten up your stay at home summer wardrobe
5 months ago
There are some brilliant discounts at Zara - we've spotted three dresses reduced to €20
5 months ago
The super flattering Zara dress that is essential for your summer wardrobe
5 months ago
Zara's €60 matching knitwear set is just gorgeous (and seriously comfortable too)
Next Page