Apparently, Kim was just responding to the brief.

Reality TV superstar Kim Kardashian has shed some light on why she chose to rock a head-to-toe black outfit which covered her face to the prestigious Met Gala on Monday evening.

Stepping out in a Balenciaga outfit, Kim K stole the show and became the most talked about celebrity at the star-studded event. 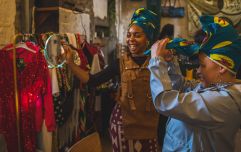 END_OF_DOCUMENT_TOKEN_TO_BE_REPLACED

However, fashion lovers were split. Some felt she was making a statement about her own star power and legacy, while others thought she'd be more at home on the set of Harry Potter.

Taking to Instagram, Kim explained that her outfit was a response to the event's theme, which was American Independence.

Captioning a series of photos from the night, she wrote: "What's more American than a T-shirt head to toe?!" 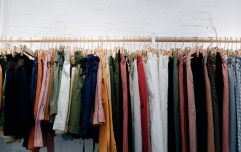 END_OF_DOCUMENT_TOKEN_TO_BE_REPLACED

I mean she has a point, to be fair.

On reflection, the outfit, with two trains and her long ponytail extended behind her, is indeed a T-shirt, which occupies a beloved place in the United States' sartorial history.

In the comments section, fans applauded Kim for the bold choice. 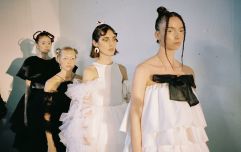 END_OF_DOCUMENT_TOKEN_TO_BE_REPLACED

Another said: "Faceless, endless hair train and comfy. Taking fashion in a new direction. You and your team crushed it at the met."

A third fan commented: "How you are the most talked about person at an event & nobody can even see you? THATS LEGENDARY."

Indeed, in a testament to the star power of the Kardashians, Kim succeeded in becoming instantly recognisable without even showing her face, so respect where respect is due, I suppose.

Other key style moments of the evening include Billie Eilish evoking the spirit of old Hollywood glamour in a stunning Oscar de la Renta gown, or Yara Shahidi paying tribute to Josephine Baker in an ornate Dior gown.

popular
Fleetwood Mac's Christine McVie has died aged 79
Fundraiser set up for boy attacked by pit bull in Wexford
The trailer for Channel 4's Vardy V Rooney: A Courtroom Drama has dropped
Fair City star Jenny Dixon shares her twins' gender in sweet video
Jill Scott admits she gave Owen Warner extra food at meal time
Why Are Men so Obsessed With Boobs? The Answer is Pretty Surprising...
Kylie Jenner shuts down claims she used her children to cover up for Balenciaga
You may also like
3 weeks ago
Princess Diana fashion searches surge ahead of The Crown season 5
1 month ago
Need a couple's costume for Halloween? Look no further
1 month ago
These are the most popular Halloween Costumes in Ireland this year
1 month ago
Bella Hadid's shoe staple is hit or miss but taking over the internet
1 month ago
PrettyLittleThings are launching an inclusive range of mastectomy lingerie
2 months ago
A brand new Penneys store in Tallaght just opened – creating 300 new jobs
Next Page