"Every day something new happens. It's all very exciting."

Last year saw Irish fashion designer Lia Cowan win the inaugural Longines Irish Champions Young Designer Award, so a collaboration with Nicola Coughlan, who was crowned by Vogue as one of 2021's most stylish women, seems, if you'll forgive the pun, only fitting.

The collaboration, Lia tells Her, came about after she simply sent a DM to the actress' stylist, Aimée Croysdill.

"I introduced the brand and said, 'Look, if you're ever looking for something custom-made for Nicola, I'm an Irish designer and it would be amazing if we could collaborate.'"

To Lia's surprise, Aimée got back straight away, and she got to work on creating a striking and sumptuous pink and red co-rd for the Bridgerton press tour. Nicola later wore another one of Lia's co-ords - this time in black and white - for S Mode Magazine. 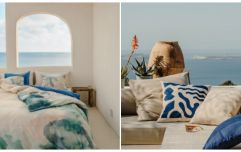 END_OF_DOCUMENT_TOKEN_TO_BE_REPLACED

The looks perfectly exhibit Lia's unique design aesthetic, which she defines as "statement sculpture pieces', a style principle that undoubtedly stemmed from her early start as a student of sculpture.

"I did sculpture in NCAD, that was my first journey into fine art and design, and then I did education," she says. "I ended up teaching art in a secondary school for three years, but I just felt like something was missing and I needed something else. I then did a PLC in fashion in Sallynoggin College, just to see how I get on, and if it's something I'm interested in, and I was just obsessed. 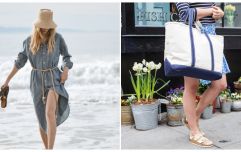 END_OF_DOCUMENT_TOKEN_TO_BE_REPLACED

It may be hard to believe, given her success so far, but it's only been a year since she's graduated.

"I've been learning as much as I can and trying to get as much experience as I can. I've been doing my own thing, working on custom pieces, and it's just taken off. One opportunity opens another door. It's definitely been a whirlwind, but it's just been great. Every day something new seems to happen. It's all very exciting."

Lia's influences are also very clear in her work.

"I love the old Commes des Garçons stuff," she says. "There is just that mix of avant-garde, sculptural, but there's this wearable aspect to it as well. You can have these crazy garments but then tone them down with a jumper, and then suddenly it's really cool and wearable."

She continues: "I love Simone Rocha and Cecile Bahnsen as well. They are two people I would turn to for silhouette. I love that sort of oversized look, very feminine and flirty."

Reflecting on her first year on her own, Lia encourages other designers to be bold and put themselves out there.

"There are so many people that I've contacted and they have gotten back to me. They might not be saying 'Yes, absolutely,' but people do get back to you. Putting yourself out there is definitely something I would encourage other designers, or anyone really, to do. With social media, it's amazing how we can be in contact with people."

popular
Singer Cliona Hagan marries Simon Sheerin in Athlone ceremony
Traditional names such as Mary, Maureen, John and Michael may soon be extinct
Mum shares hepatitis warning after young daughter is hospitalised
Wagatha Christie: Rebekah Vardy storms out of court just 30 minutes into final day
Husband demands divorce after wife changes baby's name behind his back
Deborah James "scared to go to sleep" as she receives hospice care
Kylie Jenner fans are convinced she just announced her son's name
You may also like
3 weeks ago
Meet Cadhla and Sadhbh O'Reilly - the Irish models taking the fashion world by storm
3 weeks ago
In your 30s too? The 3 beauty products that have made a real, visible difference to my skin
3 weeks ago
H&M's latest designer collab is perfect if you want to add a splash of colour to your home
4 weeks ago
Bridgerton, The Gilded Age and the rise of regency-core fashion
1 month ago
Tiny garden or balcony? 10 bargain buys to help you make the most of it this summer
1 month ago
M&S replaces 'nude' shade from all product ranges to make them more inclusive
Next Page