This new underwear had an almost 30,000 person waitlist before launching

After 40 prototypes and two years, it's finally here.

Finding lingers that is not only stylist but comfortable as well can seem like a near-impossible task - which is why Everlane stepped in.

The New York retailer is well known for their affordable (and incredibly comfortable) clothing. 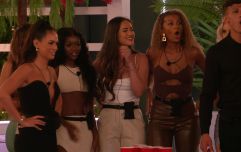 END_OF_DOCUMENT_TOKEN_TO_BE_REPLACED

So it's no wonder that people were snapping up their newest collection as soon as it launched on site.

The brand, who previously went viral for their €40 work pant with the 12,000 person waitlist, announced their underwear line on Monday, March 26.

They said in a social media statement that it had taken two years and 40 prototypes to come up with the final product.

And based off the waiting list they had before it even launched, it sounds like it was well worth the late.

"Underwear should be made for you. But for decades, it's been designed with someone else in mind.

"Bras that push, pad and squeeze. Fabrics that suffocate. Lace that chafes. The industry has made billions telling women that in order to feel sexy, they need to look like something they're not.

"But times are changing - and so should our underwear.

"Two years ago, our product team set out on a mission: create simple, natural underwear that women can feel confident and comfortable in. No frills. No bows.

"A line of beautiful, Supima cotton underwear that's healthy on your skin, flatters every curve - and made at a factory that's leading the way in ethical manufacturing. On wages. Workplace environment. And the empowerment of its 50,000 female employees."

Among the items in the new collection is a bralette, a bodysuit and four styles of underwear: bikini, hipster, high rise and thong.

Each of them are available in four colours, white, black, grey, light pink.

The collection is made of 92 per cent Supima cotton, which is well known for its softness and strength - so it's no wonder the line has already proven to be a hit with fans.

According to The Daily Mail, Everlane had a 28,420 person waiting list for their first ever underwear collection before it even launched.

And in the 48 hours that followed, the hotly anticipated collection is flying off the virtual shelves, with many sizes already sold out.

popular
Molly-Mae Hague fans think they officially know her baby's name – and it means cloud
Baby found unattended in pram in Dublin, Gardaí reveal
Joanna Cooper heartbroken after her mum is diagnosed with dementia
Tasha Ghouri hits back at another islander who called her relationship fake
Blake Lively cast in film adaption of It Ends With Us
"I feel like I lost myself": Nathalie Lennon on her mental health struggles and her latest project with Pieta
Anne Hathaway shares disappointing news about The Princess Diaries 3
You may also like
1 month ago
10 iconic Irish fashion moments from 2022
2 months ago
The first ever Afro-inspired Christmas market is coming to Dublin this year
2 months ago
Could new sustainability laws signal the end of fast fashion?
2 months ago
Irish designer Lia Cowan: "Fashion was what saved me in the end"
2 months ago
Princess Diana fashion searches surge ahead of The Crown season 5
3 months ago
Need a couple's costume for Halloween? Look no further
Next Page