Penneys are now selling Riverdale t-shirts and yeah, we need them all

Penneys are now selling Riverdale t-shirts and yeah, we need them all.

The retailer have been on the top of their game lately, launching collections inspired by Game of Thrones; Friends, Stranger Things and plenty of our favourite Disney movies.

And who can forget those adorable Baby Yoda t-shirts?

Now, the retailer have unveiled even more items for fans of The Town With Pep, aka: Riverdale.

The latest additions were introduced on Primark's official Instagram account on Tuesday, where they posted a photo of the "poppin'" sweatshirt and t-shirt.

The t-shirt (€8) is yellow and red, with the logo for Pop's Chock'lit Shoppe on the front of it. There's also a white sweatshirt (€12) with a giant R, and 'Riverdale' along the side of it.

And in good news, a spokesperson for Penneys has confirmed the latest additions to the Riverdale range will be available in Ireland - so make sure to keep an eye out for them... 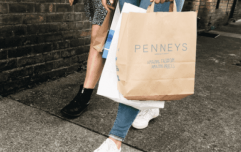 END_OF_DOCUMENT_TOKEN_TO_BE_REPLACED

It's not the first time that Penneys have released Riverdale-themed clothing.

Last month, the retailer unveiled the cosiest Pop's-themed pyjamas - and we can't believe that they only cost €12.

They also released a Southside Serpents pyajama set last month - which is priced beginning at €10.

Even the Southside Serpents love a Saturday night chill ? Prices from £8/€10/$12 #Primark #Riverdale

"Even the Southside Serpents love a Saturday night chill," they wrote alongside the photo, adding a snake emoji.

popular
It turns out we may have been brushing our hair wrong the whole time
Love, Guaranteed is the romantic comedy we never knew we needed
5 new additions to Netflix to spend your weekend watching
Irish teacher Lucy Lanigan-O'Keeffe is engaged Prince William's best friend, Thomas van Straubenzee
Face coverings are mandatory in shops and indoor settings from today
Everything you need to know about Stephenie Meyer’s new book Midnight Sun
Someone has ranked the penis size of men from all over the world
You may also like
4 days ago
Penneys and Andrew Fitzsimons release €14.99 hair straightener and dryer
1 week ago
Spotted at Penneys: Two cruelty-free dupes for popular makeup brands
1 month ago
Thanks, Penneys: Significant queues as stores reopen nationwide
2 months ago
Penneys set to reopen Irish stores next week with social distancing measures in place
3 months ago
Thanks from Penneys: the high street store is delivering thousands of care packs to frontline workers
4 months ago
Due to Covid-19, Penneys stores across Ireland have closed until further notice
Next Page