People are convinced this Victoria's Secret image has been photoshopped

Can you spot what people are complaining about?!

Lingerie giant, Victoria's Secret, is in hot water with social media followers who are of the opinion that one of the images on their official Instagram account has been altered.

The below photo, of Martha Hunt and Stella Maxwell FYI, is getting people's backs up because they think that Martha's arms have photoshopped.

This image, which is promoting the Body By Victorias Bra, shows Martha's arm with a random white outline behind it and this is what has led people to think there's something fishy going on.

There’s a reason they’re our most popular styles. And for a limited time, get a FREE Body By Victoria panty with purchase! ?? ?? only. #NewSexyNow

"It's obvious they photoshopped another photo of Hunt onto this particular photo. 1. her Abdominals and obliques (stomach area) aren't lining up correctly and 2. her arms are disproportionate. Come on Victoria Secret, we KNOW you can do a better job at photo shop than this". 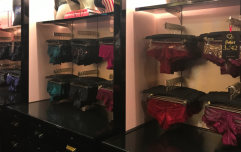 END_OF_DOCUMENT_TOKEN_TO_BE_REPLACED

In addition to the white 'halo' effect \round Martha's arm, the angle of her stomach and the fact that her elbow can be sticking out from behind Stella's back have also been commented on.

While another voiced the opinion that fashion images are often photoshopped:

"Ok guys. These are literally some of the most beautiful women in the world.

"They were chosen for their looks. 1. They're going to use photoshop because almost all advertising with models are photoshopped. 2. These women are going to naturally be smaller/lean. They are literally paid to be pretty - hence why they're models. CHILLL".

Victoria's Secret has not yet responded to criticisms that the image was photoshopped.

This isn't the first time that VS has been called out for a photoshop fail as last year the brand faced backlash regarding the below image, which appears to show how a model's bum cheek had been edited out.