Some lucky shoppers got their mitts on pieces from the line, others missed out and took to Twitter to bemoan their misfortune.

Getting my Formation World Tour tickets was less stress than purchasing #IvyPark ? @Topshop

#IvyPark selling out faster than your faves world tour pic.twitter.com/kyIoCU5mVt

Perfomance meets style. Like you need a reason to shop the #IvyPark bra tops... https://t.co/jPQwpxHEXn pic.twitter.com/G00lFROgkc

#IvyPark selling out faster than your faves world tour pic.twitter.com/kyIoCU5mVt 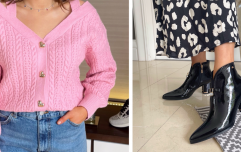 END_OF_DOCUMENT_TOKEN_TO_BE_REPLACED

FYI, there's a cool significance behind the name Ivy Park. Ivy is pretty obvious, after Queen B's daughter Blue Ivy but Park not so much.

Park relates to Parkwood, an area that Beyonce used to run in her hometown of Houston, Texas.

The gallery above contains some of my favourites but to be fair, the entire line is slick as.

Ivy Park is stocked at Net-a-Porter and Topshop and if you want to channel Beyoncé, I'd advise checking out the line sooner rather than later as it's selling uber fast.

Open gallery
popular
This hot water bottle pouch is perfect for menstrual cramps
WATCH: Parents see person walk past daughter's crib in creepy baby monitor footage
Alec Baldwin 'heartbroken' after accidental death of Halyna Hutchins
Heavy rain and unsettled conditions forecast for Bank Holiday weekend
At least seven bodies have been found in search for Brian Laundrie
Human remains found positively identified as Brian Laundrie
Maria von Trapp's daughter has died aged 90
You may also like
2 weeks ago
Tidying up: 3 TikTok organising hacks that'll change your life (and wardrobe)
2 weeks ago
Penneys launches 'posh' collection to help you build the perfect capsule wardrobe
2 weeks ago
We had a sneak peek at the the new Sostrene Grene collection, and hello hygge
3 weeks ago
Love Island's Liberty is creating her own collection for In The Style
3 weeks ago
Fashion detox: All you need for the perfect wardrobe is 37 items of clothing
3 weeks ago
Ready for visitors: The simple trick that will ensure your home is ALWAYS clutter free
Next Page
Style | 5 years ago
88
shares