It's hard to explain the literal chokehold Rachel Greene's hair had on Friends fans in the '90s. Let's face it, it was a cultural phenomenon.

Jennifer Aniston's iconic layered, shoulder-length cut was an instant classic when she first appeared on the sitcom in 1995 and it became one of the most popular hairstyles of the decade. 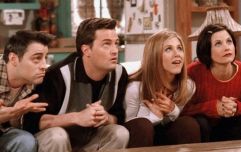 Alex and Ani have released a Friends collection and could we BE any more excited?

END_OF_DOCUMENT_TOKEN_TO_BE_REPLACED

With all things '90s making a comeback, it was only a matter of time before The Rachel reared its head too.

Searches for 'The Rachel haircut' have increased by a whopping 174 percent in 2021 after Friends: The Reunion, according to a survey by beauty retailer JustMyLook.

It's still high in demand in 2022, and it's back with a more modern twist. While the original was choppy, short, and feathered, the newer version is a softer, longer and face-framing.

Hailey Bieber, Selena Gomez and Bella Hadid, are just some of the celebrities who recently sported a look inspired by the iconic hairdo. 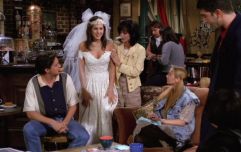 New Look have released new Friends t-shirts and could we BE any more excited?

END_OF_DOCUMENT_TOKEN_TO_BE_REPLACED

Jennifer Aniston herself once told Marie Claire that she wasn't a fan of the look for that reason: "The Rachel was high-maintenance... I'd curse Chris [hairstylist] every time I had to blowdry. It took three brushes - it was like doing surgery!" 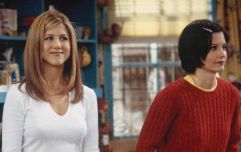 END_OF_DOCUMENT_TOKEN_TO_BE_REPLACED

And she said at the 2018 InStyle Awards: “I got that haircut and was like, ‘Wow this is amazing,’ and then I was totally left with this frizzy mop on my head, because I had no idea how to do what Chris did.”

Naturally, that hasn't stopped TikTokers from attempting it, using rollers and curling irons.

TikTok user, @asapabes, tried her hand at the trend by sectioning her hair and blow-drying each piece away from her face using a hot barrel brush, then pinnings the curls in place with rollers.

And judging by her results, it looks like it's not quite as unachievable as Jennifer made it out to be.

However, one thing that takes The OG Rachel to the next level is Jennifer's her contrasting blonde highlights. If you're thinking of going all out, we recommend making an appointment with a professional.

popular
Love Island’s Afia explains why Gemma’s dad has not been mentioned on show
Love Island fans concerned over "bullying" of Ekin-Su
Two dumped islanders have confessed their feelings for each other since leaving the villa
Woman saved from hostage situation after leaving note on food delivery order
Love Island fans are in shock after new boy Charlie revealed his age
PSA: Casa Amor is happening - and soon
Shaughna Phillips brands Love Island heart rate challenge "fixed" and "vile"
You may also like
1 month ago
Tributes pour in for Friends star Mike Hagerty who died at 67
3 months ago
You can buy a Friends-themed house complete with your very own Central Perk
4 months ago
The Chase fans can't get over yesterday's Simpsons family contestants
4 months ago
Courteney Cox opens up about ageing and why she stopped 'chasing youthfulness'
4 months ago
Matt Le Blanc splits from Irish girlfriend Aurora Mulligan after six years
6 months ago
SATC could’ve looked very different as Kristin Davis almost played lead role in Friends
Next Page