Our top 9 favourite looks from the Golden Globes red carpet

It's officially the beginning of the awards circuit and the Golden Globes' red carpet really sets the tone for the season ahead.

As the celebrities turned out in their masses, a few trends could be taken from what was worn on the red carpet. A big player was puffy sleeves, bows, and surprisingly, sequins. There was also a lot of black and white seen last night, which could be a big hint for what's to come.

Disclaimer: I didn't include any puffy sleeved dresses because, frankly; the trend has been done to death on the high street and I'm kind of over it.

But anyway, I picked out my top 9 favourite looks from the red carpet, which I think you can agree go from classical looks, to the trendiest pieces.

I adored Cynthia's dress for its sexy, yet classic shape. It featured an off-the-shoulder, plunging neckline and a thigh high split. However, the Thom Browne number really kicked things up a notch by being completely adorned with Swarovski crystals. Cynthia was one of the best dressed last night, in my opinion. 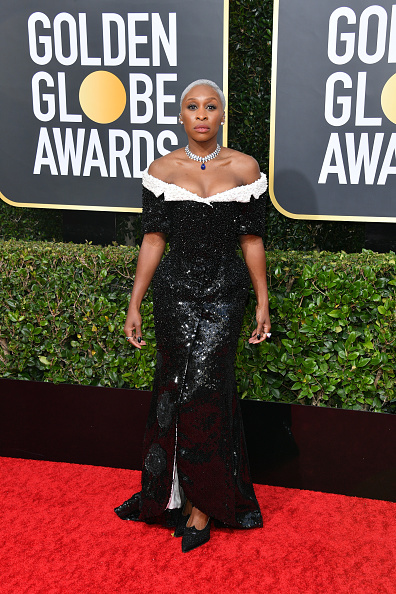 Is a red carpet complete without the appearance of Billy Porter? I think not. Billy didn't disappoint last night in his Alex Vanassche white suit. The look was completed with a feathered train which brought all the drama. A shout out also has to be given to his crystal-encrusted Jimmy Choo boots - they're just dreamy. 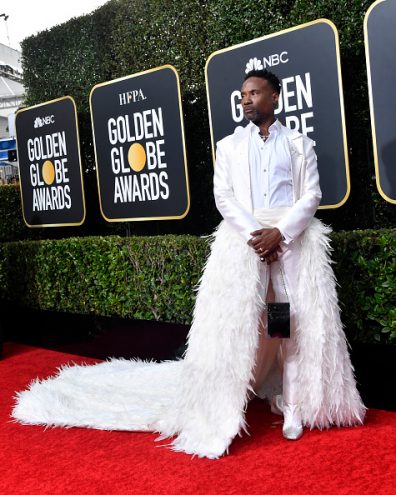 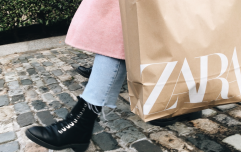 END_OF_DOCUMENT_TOKEN_TO_BE_REPLACED

While she missed out on the award for Best Actress in Drama Motion Picture for her role as Jo March in Little Women, she was a vision on the red carpet. The Irish actress wore a bejewelled Celine number which featured a thigh-high split, slight cowl neck and a super low back. I love how she kept her hair and makeup to a minimum which really made the dress shine. 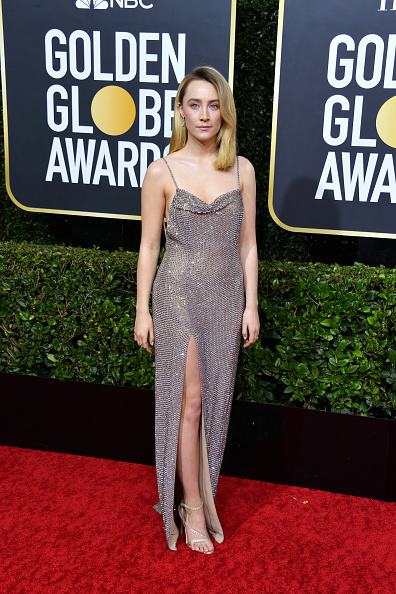 I have already written about Joey King being one to watch in 2020 and she didn't disappoint me last night. The actress took to the red carpet wearing an Iris Van Herpen design which I think made her completely stand out from the crowd. The design on her looked flawless and I love how she simply put her hair in a pony. Understated, yet elegant. 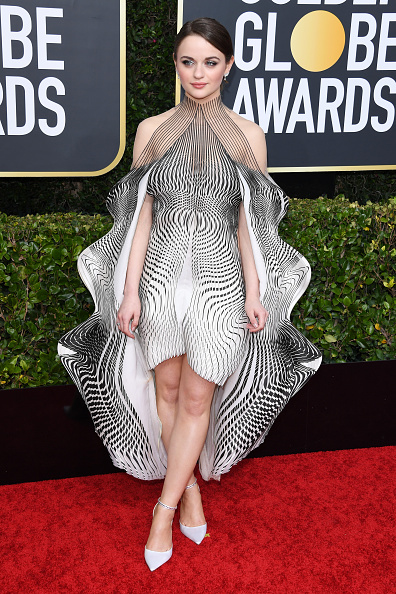 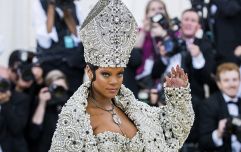 QUIZ: How well do your know your fashion designers?

END_OF_DOCUMENT_TOKEN_TO_BE_REPLACED

Polka dots are going to be a major player in the trends field this season and Zoë slayed it on the Golden Globes red carpet. Wearing Saint Laurent, the strapless column dress included a ruffled top with off-the-shoulder three-quarter length sleeves, and a white-on-black polka dot pattern. She finished off the look with a bow around her waist which made the whole look fun and flirty. 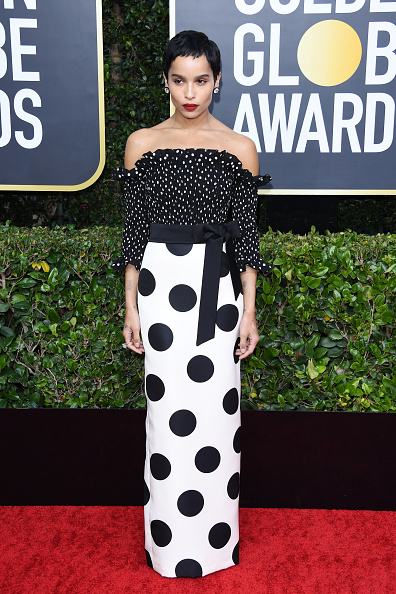 If you want to do sequins the right way, then take a page out of Ana de Armas' book. Ana's Ralph and Russo dress gave me all the Disney princess vibes while also being dark and Gothic. The Knives Out actress certainly turned heads in the midnight blue shining number and I'm quite obsessed with her Tiffany & Co choker necklace. 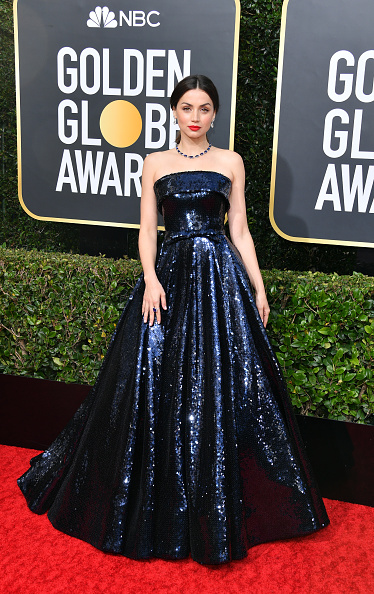 There has been a lot of discussion about this dress online, with some loving it and some hating it. I think it's quite out-there, the colour is daring and the fit is perfect. While yes, the striking green hue might not be to everyone's taste, I like how Charlize stepped outside of the box and went for something a little different. 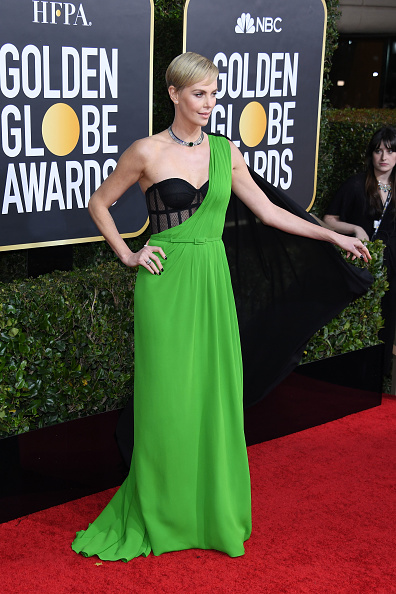 It's striking, it's different, it's sexy. Gugu went for quite a flashy gold Gucci number last night, and while a gold dress is nothing new, I adore that it's not full length. With that one detail it sets it apart from the other dresses on the red carpet and I also love how she matched it with a red lip. Perfection. 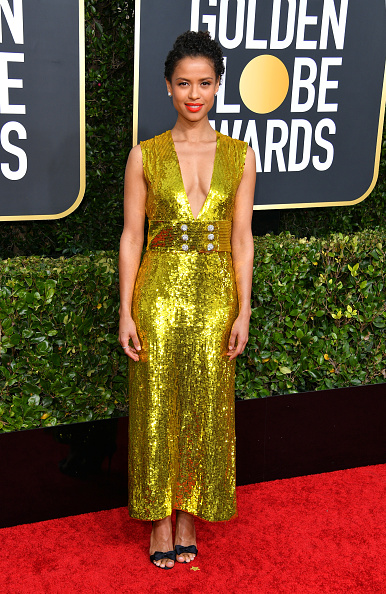 Hell yessss to this glorious suit! Phoebe Waller-Bridge was one of the few women to rock a suit on the red carpet last night and she pulled it off effortlessly. The Ralph and Russo blazer was adorned with a bow on the side, and she wore nothing underneath, instantly giving it an edge. Better yet, Phoebe pledged to auction the suit, with the money going to crisis relief for the Australian fires. 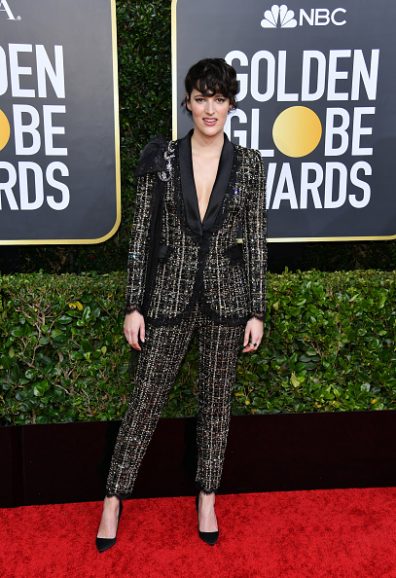 
popular
BRB, running to Penneys for the €19 trousers that look like they cost ten times the price
Say hello to the €40 Stradivarius dress you're going to be seeing everywhere in summer
Prince Harry and Meghan Markle to attend Princess Beatrice's wedding despite 'snub' reports
Holly Willoughby's Zara shirt is the workwear must-have you need in your life
Introducing the €35 Penneys coat you're going to see everywhere on Instagram next season
EastEnders have 'revealed' Bex Fowler's exit storyline
Netflix's The Woods is the thriller that will be your next TV obsession
You may also like
6 days ago
If you're getting married soon, you absolutely need this stunning €70 Zara dress
1 week ago
The PERFECT €22 Penneys dress everyone will be rushing to buy in the coming weeks
1 week ago
The gorgeous Penneys trousers that are a must-have for your workwear wardrobe
2 weeks ago
You're going to be full-on obsessed with these INSANE €12 Penneys pants
2 weeks ago
The River Island dress that would be just STUNNING for an upcoming hen party
2 weeks ago
LIVE BLOG: 2020 Oscars red carpet
Next Page