The average adult spends 34 years of their life looking at a screen, research has found.

2,000 adults in the UK were surveyed by OnePoll for the research, which was commissioned by Vision Direct. 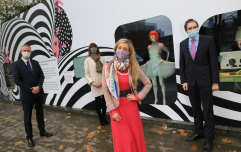 END_OF_DOCUMENT_TOKEN_TO_BE_REPLACED

According to Metro, the survey found that between the ages of 18 and 81, people spend around 4,866 hours staring at screens in a single year.

That ends up being around 13 hours a day. And while that may seem like a lot, it all adds up between work, Netflix (or your streaming service of preference), and catching up with pals through WhatsApp.

The research found that computers were the most popular source of screen time, followed by TVs. Mobile phones rounded out the top three.

"We’re lucky to have devices that connect us with the outside world," Vision Direct's Benjamin Dumaine said.

"A similar pandemic taking place 30 or 40 years ago would have seen people coping with the lack of contact in very different ways."

Girls With Goals || Her · Ep.160: The Beauty Of Coaching - Hayley Harrison joins us from Sport Ireland
popular
Body found in search for missing woman in Waterford mountains
Roz Purcell introduces 4 - 30 sizing for new Hike Life collection
Jockey Lorna Brooke dies aged 37 after racecourse fall
Line of Duty fans think trailer reveals Kate's fate
Man charged with murder of 24-year-old mother Jennifer Poole
Tayto Park Zoo confirm reopening date this month
Rosacea awareness month: 3 skincare products many rosacea sufferers swear by
You may also like
1 week ago
Study reveals women are more likely to suffer from chronic pain than men
4 weeks ago
According to a 75-year-long Harvard study, the key to happiness is rather simple
2 months ago
Red flag: Study shows men on dating apps focus more on women younger than them
4 months ago
New parents lose up to 44 days of sleep during the first year, says study
6 months ago
Children more likely to contract Covid from other children, shows new study
6 months ago
Are you the middle child? It could mean that you're the better friend AND more reliable!
Next Page