This is taking dating apps to the next level.

Bumble's original unique selling point was that it would only allow the woman to message first, and she only had 24 hours to do so. Similarly, once that first message is sent, the recipient only has 24 hours to reply.

This was supposed to be a more mature alternative to the free-for-all messaging style of Tinder. 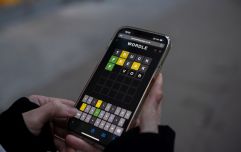 END_OF_DOCUMENT_TOKEN_TO_BE_REPLACED

Bumble has continued to flesh out its online dating service, allowing users to add questions and personal details, including their religion and their star sign.

Now the app, which has been around since 2014, is allowing users to call each other in app - without even swapping phone numbers. Somewhat thankfully, the feature is double opt-in, meaning that nobody will be able to call you unless you have the call feature enabled.

CEO of MagicLab, the parent company of Bumble, Andrey Andreev says the new feature is aimed at "giving users a more real life interaction, and saving them time by getting a deeper understanding of who they’ve matched with before they decide to meet in person or share valuable contact information."

The feature will also allow for video calls, which means users can verify more about who they are talking to without having to give over any personal information in exchange.

popular
Hang on, Tasha and Coco know each other already?
Suzanne Jackson taking a "step back" from her business
Tonight's episode of Love Island will be extended due to "explosive" recoupling
Reports of image based sexual abuse involving 200 women investigated by Gardaí
One Tree Hill star Bevin Prince’s husband dies after being struck by lightning
WATCH: Gemma is left fuming in tonight's Love Island as Luca kisses another girl
Hang on, is Boris Johnson entering the Love Island villa tonight?
You may also like
5 months ago
Dating after Covid: Has the pandemic changed everything?
7 months ago
Red flags or red bunting? This is what experts say you should watch out for
1 year ago
60 per cent of Irish people open to sharing virtual meal for Valentine’s Day
1 year ago
'Beard-baiting' is now apparently a dating trend - and we're all for it
2 years ago
Filter Off: The speed-dating video app proving popular during the pandemic
2 years ago
These are the most swiped right jobs on dating sites
Next Page