A few years back, Apple launched the iPhone's portrait mode.

It was a way of taking photos that focused on the person at the centre of the snap, blurring out the background, lighting up the subject, and basically making whoever was in the image look 10x better than they do in real life.

It's a decent enough feature, one that has revolutionised the way we take photos of our mates for the 87th time as they stand in their house porch waiting on their FreeNow to bring them to the club.

And now, we're going to be able to use portrait mode on our pets too.

Well, if you fancy shelling out for a new iPhone, that is.

Along with the device came an abundance of additions that made it a pretty decent phone (new powerful charger, come at me), but the main feature that has got everybody hyped up is the new and improved portrait mode - that now recognises pets' faces. 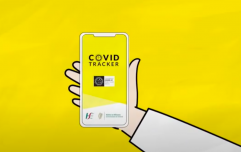 END_OF_DOCUMENT_TOKEN_TO_BE_REPLACED

Adorable? You bet. Absolutely necessary? You know it.

Regular old portrait mode did work on non-humans in some cases, however now the feature has been optimised to ensure that users can get the best possible shots of their doggo.

After all, animals have faces too.

And those faces deserve to be detected.

The new phone, available to pre-order from this Friday, includes:

They, unsurprisingly, also cost a lot of money.

popular
The €9 buy fans swear is an EXACT dupe of Estée Launder's popular Double Wear foundation
Between seasons: These fab sale buys will see you through to autumn
It turns out we're all peeling oranges wrong and this madness has to stop
How to cope in this humidity: From sleeping better to dealing with frizzy hair!
Billy Connolly Has Harsh Words With Russell Brand, After Brand Asks a Woman to Flash Him...
Here's what happens on every day of your menstrual cycle (roughly)
This no bake 'Chocolate Refrigerator Cake' recipe has us drooling
You may also like
11 months ago
Here’s how much the iPhone 11, iPhone 11 Pro, and iPhone 11 Pro Max will cost in Ireland
8 months ago
Twitter to remove inactive accounts and free up usernames in December
8 months ago
Stuck on gift giving? Here are 6 household must-haves that would make any home better
8 months ago
I took all my selfies on a Nokia 3310 for the day and I looked surprisingly alright
8 months ago
Apple has banned all vaping apps from the App Store
9 months ago
The Motorola Razr flip phone is coming back into our lives
Next Page