Our favourite 90s computer game will now be available on phones

Hours upon hours were wasted playing this...

Well this is a blast from the past. 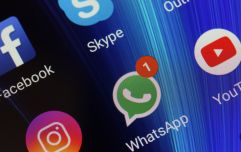 END_OF_DOCUMENT_TOKEN_TO_BE_REPLACED

While you can get versions of the card game on apps across iPhone and Android, only now is the official game available to download.

Microsoft has released the official version of the game called the “Microsoft Solitaire Collection,” which offers five virtual card games.

It obviously has the classic Klondike but also included Spider, Frecell, Tripeaks and Pyramid.

The classic game is available to download as of this week.

You can get a free month subscription of the app's premium edition, worth $1.99, between Nov. 23 and Dec.31. The premium version has no ads and offers rewards and boosts.

At this rate, hopefully we'll be playing with Microsoft Paint and MineSweeper in no time.

popular
These are the top baby names for 2022
Man charged in connection with Ashling Murphy's murder
Teen who pushed girl “head first” under Dart to face trial in adult court
Netflix shares more pictures from Bridgerton season 2
Here are the Covid restrictions that may be lifted as early as next week
14-year-old girl rescued from kidnapping after police follow Snapchat location
Fans convinced Love Island's Chloe inspired new Kanye track
You may also like
1 week ago
Model issues warning after being tracked with device and followed home
11 months ago
Apple to unveil 217 new emojis, including gender neutral faces
1 year ago
Apple forced to pay $100 million after admitting they slowed down old iPhones
2 years ago
Here's how to stop your phone from always saying 'duck' and 'ducking'
2 years ago
Apple have introduced period and disability emojis in their latest update
2 years ago
These are all the mistakes we're making when charging our phones
Next Page