Second, an app such as this is actually fairly useful if you - like us - are chronically afraid of all things rogue defecate and the possibility that this defecate will accidentally end up on the bottom on your new pair of Balenciaga runners.

It's a tough world out there and we do not endorse it.

Still though, people need to get places and other people are bad at cleaning up after their dogs so chances are if you've ever walked down a road before, you've stepped in dog shit.

It might not happen for much longer though because someone's gone and developed an app that'll warn you when there's poo about.

It's called 'Snapcrap' and we are in dire need of a download. 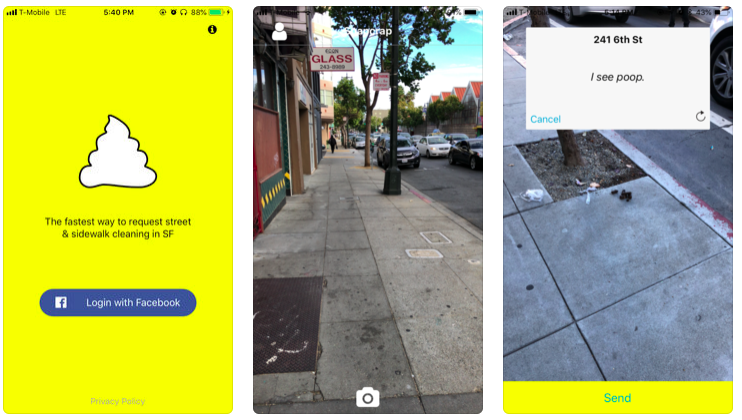 Except, this app doesn't exist for animal faeces, but for human ones. Because yes, this is a glaring issue in some places around the world.

San Fransisco is one of those places that has for some time now been plagued by human poo on the streets.

END_OF_DOCUMENT_TOKEN_TO_BE_REPLACED

People have gotten so sick of it that they've decided to start using Snapcrap to alert the Public Works Department as to where to poo is so they can go and clean it up.

The app's creator, Sean Miller, said he developed the app after he moved to San Fran and got sick of stepping in human poo whenever he walked down the street.

He told the LA Times:

"Pretty much everyone who lives here is pretty well accustomed to seeing this stuff when you’re walking down the street in every neighborhood.

"It’s very frustrating. You should be able to pull out your phone, take a photo and send it to the city to have it cleaned up."

And now you can.

popular
Power ponytails and perfect messy buns! Here's some TikTok hair hacks to try at home
Irish influencer Lisa Jordan reveals her little boy's name and it's so cute
Ed Sheeran is reportedly expecting a baby with wife Cherry Seaborn
Our Girl is axed after talks for Jacqueline Jossa to replace Michelle Keegan are shelved
This 'Mississippi Mud Pie' recipe is a must-try for chocolate cake fans
The Harry Potter AirBnB announced it has availability this month and we'll race you
Jennifer Aniston has made a statement about her relationship with Brad Pitt
You may also like
1 day ago
83,000 people uninstalled Covid Tracker App following battery issue
5 months ago
Air New Zealand wants to introduce bunk beds on its flights for economy classes
6 months ago
Irish mobile network GoMo introduces €12.99 a month for life offer
7 months ago
Bad news! WhatsApp will stop working on certain phones from TOMORROW
7 months ago
You can now get long distance touch bracelets to let your far away friend know you're thinking of them
9 months ago
New WhatsApp update stops people adding you to pointless group chats
Next Page