Some WhatsApp users have been hit by a new bug that doesn't let them see the name of a message sender after they get a notification.

The issue appears to have been caused by an update to the popular app.

And while it's not exactly the worst as far as things go, it sounds like it would be pretty annoying to have happen.

Plenty of people have taken to social media in an effort to try and find a solution to the problem.

Hello why is my Whatsapp notifications like this it’s super unhelpful pic.twitter.com/9dm5TNCzMN

This new WhatsApp notification not showing you who the message is from is driving me absolutely mental.

I don’t want a preview of the message but I would like to know who it is from. 🙄 😤

Why have my #WhatsApp notifications changed? It no longer tells me the sender 🧐 pic.twitter.com/fSn3GDCXVt

Anybody else WhatsApp notifications just randomly start coming in like this? How do you fix it? Because.....I feel like throwing the whole damn app away 😑😑😑 pic.twitter.com/JsIlKtznZc

However, it looks like there's a way to fix the issue.

If you go to WhatsApp Settings and scroll until it says Show Preview and turn on that switch. 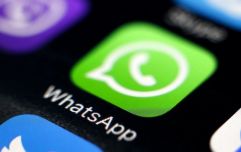 END_OF_DOCUMENT_TOKEN_TO_BE_REPLACED

Scroll to where it says Show Previews, then select Never.

According to the Mirror, an update has been released since the glitch was first noticed.

And while it claims to fix the issue, a umber of social media users say they are still affected.

The publication notes that most of the people impacted are iPhone users, while there doesn't appear to be many Android users affected.