A bride has come under fire after banning her bridesmaid from getting her hair and make-up done - as she doesn't want anyone to "outshine" her.

The understandably frustrated bridesmaid shared some messages she received from the bride-to-be on social media, which were then shared on Reddit.

The woman began by asking if she could ask her bridesmaid "a favour." And when she tells her to go ahead, the bride-to-be drops the bizarre question.

“I don’t mean to sound weird but can you not wear make-up for my wedding," she tells her.

The bridesmaid points out she doesn't wear much makeup anyways, but that she thought it would have been expected as it is a wedding. 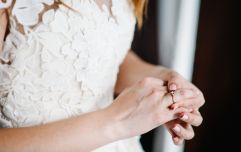 END_OF_DOCUMENT_TOKEN_TO_BE_REPLACED

“Why? I don’t wear make-up regardless but isn’t everyone getting their make-up done," she asks her, to which the bride replies: “Yeah but I don’t want you to outshine me.”

She quickly follows it up with another message, asking the bridesmaid not to get her hair done.

The woman repeats the bride's requests back to her, just to make sure things are clear.

She asks the bride:

“So you want me to be [in] a formal dress with my hair natural and no make-up?”

The bride, seemingly over the moon, replies:

“Yes please. Are you okay with that? Because it should be about me that day and [I] don’t want anyone to look better.

The texts have gotten a huge reaction since they were first shared on Reddit earlier this month.

“I feel a lot worse for the bridesmaids she didn’t text...," one person commented.

“Grown women who do this need counselling," someone else said.

“The bride will shine even if one or all the bridesmaids are prettier. I never understood why they think they won't," another person wrote.

popular
Netflix's true crime series Sins of our Mother is seriously insane
Why Are Men so Obsessed With Boobs? The Answer is Pretty Surprising...
So, William and Harry have a step sister... and who knew?
Dyson's new limited edition hair tools is our Christmas list sorted
Smyths issues warning to parents ahead of Christmas
Brian O'Driscoll brings the wrong dog home from the groomers
Riverdale actor Ryan Grantham charged with murder of his mother
You may also like
5 months ago
8 stunning bridal headpieces for your big day
5 months ago
Bride dubbed 'the devil' after strict dress code for wedding day
10 months ago
Bride asks her guests to pay $150 to attend her wedding
11 months ago
Bride receives bouquet of chicken nuggets from best friend on wedding day
1 year ago
Bride dislocates her leg during her first dance in viral clip
1 year ago
Bride complains wedding dress looks "nothing like order" before realising she had it on inside out
Next Page