Dating and cosmetic surgery? Do they cancel each other out?

Have you had cosmetic surgery?

Cosmetic surgery has been on the rise over the past couple of years - from the Kylie Jenners of the world to the Charlotte Crosbys, it seems like nowadays, it's turning into a normal procedure; just like getting your hair or nails done.

And more and more clinics have opened up in Ireland that offer the procedures, which means cosmetics enhancements are pretty common throughout the country.

But does it impact your dating/love life?

Well, a new survey has found that the majority of people wouldn't mind if you've had something done to enhance yourself. 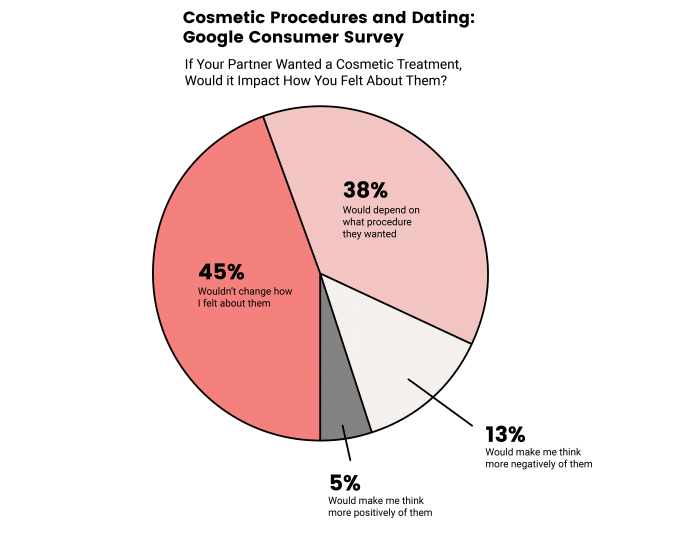 A new Google survey commissioned by Realself, has found that if their partner or potential date wanted a cosmetic treatment it wouldn’t change how they felt about them.

However, that depends on what they're getting done.

40 percent of those surveyed said that how they felt about surgery would depend on what procedure their love interest wanted.

So basically, some enhancements are seen as positive, while others negative.

popular
Taxi driver who dropped missing woman Bernadette Connolly off comes forward
'Oystering' is set to be the dating trend of 2022 - but what is it?
Sinéad O'Connor shares emotional new song dedicated to late son Shane
Man arrested on suspicion of murder of Ashling Murphy
Fans convinced Love Island's Chloe inspired new Kanye track
Ashling Murphy's funeral to take place today
Euphoria fans delighted after learning Fezco's Irish connection
You may also like
1 week ago
Here are the makeup trends set to take over in 2022
1 week ago
Everyone is talking about slugging – the skincare hack that will fix your dry skin
2 weeks ago
'Fluffy hair' is the 90s blonde trend you're about to see everywhere
2 weeks ago
Common mistake might be why you can't get your hair to hold curls
3 weeks ago
10 easy makeup ideas for your New Year's Eve party
3 weeks ago
I completely ditched foundation - and these 3 products helped me do it
Next Page