Noelle O’Connor first came to our attention back in 2010 when she presented her brand TanOrganic on RTÉ’s Dragons' Den.

Yep, the entrepreneur secured a serious investment from Gavin Duffy on the show eight years ago which resulted in €1million worth of sales in the three months after the show aired.

However, after buying out the dragon in 2014, she’s now looking for more and appeared on the UK version of Dragons' Den last night to try and get it.

Noelle’s appearance on the show marked the first time an entrepreneur had appeared on the show twice - setting a new record on the series.

Taking her place in front of five unfamiliar dragons, Noelle admitted the experience was quite different to her first.

“I have crawled over glass to get where I am today and have become a tougher person,” she said.

"But I couldn’t believe how traumatising I found it seeing the five dragons in front of me and my emotions got the better of me.

“It was a very different experience from my first in Ireland. It’s really difficult, it’s designed to intimidate people and ask you questions you can’t answer properly.”

Holding her own and making a killer presentation, Noelle was offered an investment from four out of the five dragons but chose to reject their offers. 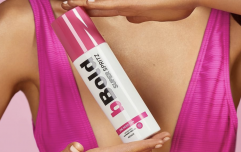 END_OF_DOCUMENT_TOKEN_TO_BE_REPLACED

Her instincts have been right before as her company has seen sales double each year since Gavin Duffy’s initial investment eight years ago.

And while Noelle might have left without investment, she did leave with a whole lot of praise from viewers at home, including the former investor himself.

A great pitch Noelle and well done for holding your ground...

Noelle from @TanOrganic is getting offers all round tonight....great presentation! #dragonsden

Congrats Noelle & Aaron on your appearance on @BBCDragonsDen and getting four offers tonight. pic.twitter.com/sQrz7F3hbz

This is by far the best tan I have ever used . Just hope you get the support you want but personally I think you are doing a fabulous job on your own. #bestproductever #TanOrganic

popular
Claire Byrne Live viewers in shock as woman shares family DNA secret
Teenager dies in sand collapse after digging hole on beach
Gogglebox fans show an outpour of support for star after hospital picture
Derry Girls creator shares three more storylines that never made it into the show
Man behind Marilyn Monroe dress says letting Kim Kardashian wear it was a "big mistake"
Lesbian couple attacked in Dublin thank public for support
The six Eurovision countries with "irregular voting patterns" have been revealed
You may also like
2 years ago
I was on a mission to tan my own back and here's the method that actually worked
2 years ago
The €8 product I'm currently using for removing stubborn tan (and it works like a dream)
2 years ago
Tried and tested: I reviewed 5 ultra dark tans and my favourite one was only €16
2 years ago
TanOrganic is urging you to go vegan this month with your tanning products
2 years ago
Work tomorrow? Here's the best way to remove stubborn tan from your fingernails
2 years ago
Cocoa Brown has just launched an amazing tanning water, and we're excited to try it
Next Page