Kim Kardashain, for better or worse is quite the trend setter.

Whether it's wearing underwear as a top or clear boots, the reality star never fails to get people talking, and this new trend is no exception. 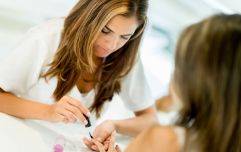 END_OF_DOCUMENT_TOKEN_TO_BE_REPLACED

Kim recently took to Snapchat to display her new dramatic nails, and they are like nothing we've seen before. Along with silver metallic nails the 36-year-old's manicure also featured several piercings.

Each nail features two piercings with gold rings through them.

The piercing is not a new trend however, as Kim's younger sister Kylie sported a more subtle version of the look a few years back.

And long before the Kardashians were at it, it was quite the trend among young girls in the 90s.

But we're sure it will become even more popular now that Kim is displaying it across her social media platforms.

I got a nail piercing 😏 pic.twitter.com/nR45hjTwqJ

Here's how other people are sporting the trend.

Does the trend only work on false nails? Does it damage your nails? Will it take off and become a popular trend here in Ireland?

We have so many questions.

Would you ever give it a go?

Girls With Goals || Her · Ep.153: Scholarship Squad - We chat to Facebook's Claire O'Hara about our Smurfit Scholarship fund.
popular
Matthew Perry's dad was a character on Friends and how did we not notice?
Irish people urged to send a hug to loved ones on National Hugging Day in aid of Ronald McDonald House
Robbie Williams "fairly sick" with Covid while holidaying in Caribbean
Gwyneth Paltrow's vagina candle "explodes" in woman’s living room causing fire
Gilmore Girls star says he didn't storm the Capitol, praises those who did
Josepha Madigan compares issues around schools reopening to Mother and Baby Homes
Seven Things You May Not Have Known About... Garth Brooks
You may also like
3 years ago
Woman's Facebook warning that this nail issue could indicate cancer
3 months ago
A Hocus Pocus makeup collection has launched and it will cast a spell over you
3 months ago
Having trouble falling asleep? Lush have added a brand new mask to their "miracle" Sleepy range
3 months ago
Victoria Beckham is releasing a line of Spice Girls-inspired lipsticks
3 months ago
Having written about beauty for a decade, here's the morning routine I swear by for glowing skin
3 months ago
Curtain bangs are trending - here's everything you need to know
Next Page