The Pat McGrath x Star Wars collection is all we want for Christmas this year.

There's just a few weeks to go until Star Wars: The Rise of Skywalker, the final chapter in the Skywalker saga, hits cinemas.

And right when we thought we couldn't be any more excited, it turns out that Pat McGrath has teamed up with Star Wars to release the dreamiest makeup collection.

According to @trendmood1, the collection will be released in mid-December - and will include seven limited-edition Star Wars products, from lip balms to palettes. 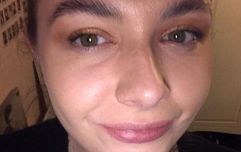 Tried and tested: I got my eyebrows laminated, and I'm absolutely weak for myself now

END_OF_DOCUMENT_TOKEN_TO_BE_REPLACED

Fans have been going wild ever since the news emerged on Monday evening. Pat McGrath put up a post earlier this afternoon to officially announce the collection.

Alongside the announcement, which included a video showing off the products as well as highlights from the films, they wrote:

The end of the video also confirmed when the collection would be available online: December 13.


popular
Say hello to the €40 M&S dress that will instantly brighten your spring wardrobe
Future planning: The 2020 baby names predicted to make the most money in their lifetime
Met Éireann issue low temperature weather warning for 25 counties
The €30 New Look skirt we're going to be living in for the next few weeks
Tried and tested: I got my eyebrows laminated, and I'm absolutely weak for myself now
Groom calls his fiancée a 'toddler throwing a tantrum over a sparkly toy' for not wanting to buy a €90 wedding dress
Meghan and Prince Harry issue statement after agreement to leave the royal family is confirmed
You may also like
2 days ago
Kat Von D has stepped down from her makeup brand after 11 years
2 days ago
The three products I swear by for making my hair extensions softer than ever
3 days ago
Jeffree Star confirms the discontinuation of two eyeshadow palettes
4 days ago
Januhairy: women are throwing away their razors this month to address the prickly issue of body hair
6 days ago
Sale of cosmetics tested on animals banned in California, Nevada, and Illinois
1 week ago
Clean beauty: I have found the best natural deodorant that actually works
Next Page